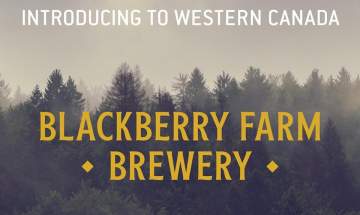 We’ve got another packed week of events coming up, with a huge variety of things happening all over the province. Have fun out there!

Tonight, Heron Rock Bistro in Victoria is holding a 4 course medieval-themed dinner with each course paired with a beer from Salt Spring Island Ales.

In Whistler tonight, Handlebar Cafe is hosting a tap takeover by Callister Brewing, Good Buddy, and Sundown from East Vancouver.

In Pitt Meadows tonight, Foamers’ Folly is holding a launch party for the release of their new Unicorn Blanket farmhouse ale collab with Fuggles & Warlock.

On Saturday, Untapped is holding multiple launch parties for the arrival of Tennessee’s acclaimed Blackberry Farms Brewery. There will be events at The Drake in Victoria, Biercraft in Vancouver, and Curious Cafe in Kelowna with 7 beers on offer.

Also on Saturday, John B Neighbourhood Pub in Coquitlam is hosting a tap takeover by The Bruery & Bruery Terreux, with 22 rare beers on offer from this famed California brewery.

Looking for something a little different? Phillips Brewing is holding an event called Phillips & Phriends at the Victoria Events Centre on Saturday, which is set to showcase 5 bands featuring Phillips staff members.

Next Wednesday, Smiths in Victoria is hosting a launch party for the new Twin Sails and Collective Arts Thunder Buddies DIPA collab, plus they will be pouring several other beers from both breweries.

That same night in Vancouver, the Alibi Room is hosting a launch party for the new Collective Arts and Superflux collab IPA, plus they will be pouring several other beers from both breweries.