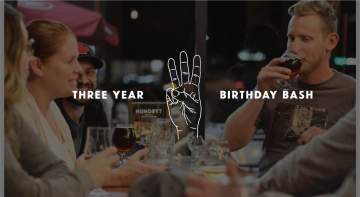 Nanaimo Craft Beer Week kicks off tonight with IPA Flight Night at Windward pub, featuring four top BC IPAs rarely seen on tap in Nanaimo. This is followed by a cask night on Friday at White Sails, featuring one-offs from White Sails, Townsite, and Gladstone. While the main festival on Sunday might be sold out now, there’s also a tap takeover at The Cambie on Saturday, featuring 12 beers from BC’s top breweries that have never been on tap in Nanaimo.

On Friday night Major League 2 Taphouse in Chilliwack will be hosting an Old Yale Brewing Tap Takeover, featuring 10 of their beers and a special one-off cask.

On Saturday, Trading Post Brewing is celebrating their third anniversary with a special beer release, live music, commemorative glasses, and brewery tours. If you can’t make it out to the brewery, they will also be hosting a release party and mini tap takeover at Darby’s Gastown that same day.

If you are looking to plan something special for Valentine’s Day next Thursday, Luppolo Brewing is holding a beer and chocolate night with a  guided pairing of 5 beers and chocolates lead by head brewer Ryan Parfitt and chocolate expert Jasmine Lukuku.

That same night, The Drake is showing some love to the 6 breweries that supported them greatly during their early days, with all taps dedicated to Dageraad, Four Winds, Steel & Oak, Moody Ales, Powell, and Brassneck.