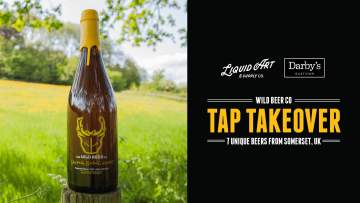 It is safe to say we are quickly coming out of the mid-winter slump, with more craft beer events this week than you can shake a stick at! Warning: please don’t try swinging a stick at any of these events!

Today, Dead Frog Brewery in Langley is holding a release party for the 2019 version of their fan favourite Commander imperial stout. They will be giving out free tasters, selling pints, serving beef dip with Commander-infused au jus, and will even have a one-time cask with a special twist.

Tonight, Darby’s Gastown is hosting a draught launch party for the new Cascade edition of Strange Fellows’ Cyclohops single hop IPA. They will be pouring pints and brewery representatives will be in attendance.

Also tonight, The Train Station Pub in Kelowna is hosting their third battle of the breweries. This time it’s a showdown between Twin Sails and Backcountry. Who will be crowned king of the haze bois?

On Saturday, Darby’s Gastown is hosting a tap takeover by England’s Wild Beer Co., where they will be pouring half a dozen beers, including their new WineyBeest imperial coffee stout, and a couple of other rarities.

Next Wednesday, Smiths pub in Victoria is hosting a tap takeover by Squamish’s Backcountry Brewing. They will be pouring all of their core beers, as well as their Dead Of Night Galaxy IPA, their Your Mom Goes To College Bboysenberry & vanilla sour, and maybe one more surprise.