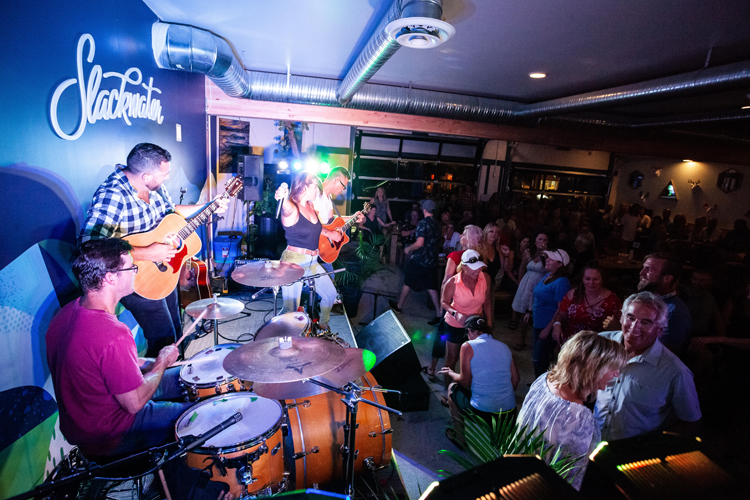 “Having spent my first seven years in Canada in Whistler, I have a lot of lifelong Australian friends and it’s terrifying to fathom what some of them are going through right now. Australia Day was always a blast in Whistler, so we thought we could turn this celebration into something bigger and try to help out,” says Liam Peyton, Co-Founder of Slackwater Brewing.

“As soon as we announced the event the support from our local community, and beyond, was overwhelming,” Peyton continues. “Donations for the silent auction started piling in, Jack and Jill offered to perform a few sets to get the party started, and then some of our partnered bars in the ski resorts that we service wanted to help out too.”

Joel Simons, one of the brewpub’s bar leaders is from Victoria, Australia and has been helping lead the charge with getting the local community involved. “With Australia Day coming up, we thought it would be a perfect opportunity to engage our local community to help raise awareness and funds for our friends back home battling the worst fires the country has ever seen,” Joel says.

Gunbarrel Saloon, Apex Mountain Resort – $2 per sleeve of Slackwater beer sold and $1 from each special ‘Aussie Burger’ sold on January 26th will be donated to the Victoria Bushfire Relief Fund.

1609 Restaurant & Lounge, Silver Star Mountain Resort – Owner-operator Scott Kielly, an Australian ex-pat will be donating $1.50 per sleeve of Slackwater beer sold to the New South Wales Rural Fire Service. To top it off they are also hosting a silent auction online, with winners being drawn the following day (Monday, January 27th).

Brickworks Public House, Whistler – will be donating $1 from each Slackwater beer sold and $5 from each of their Aussie Burgers to the Victoria Bushfire Relief Fund.

Dubh Linn Gate Irish Pub, Whistler – will be hosting a delicious breakfast to fuel your fundraising efforts on Saturday January 25th and Sunday January 26th between 9am and noon, will all proceeds from their ‘Aussie Breaky Sanga Special’ and Idleback Amber Ale combo going to the Australian Red Cross.

To find out more about how you can get involved this weekend, contact Slackwater Brewing at [email protected]