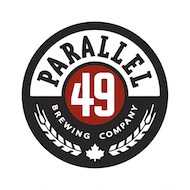 Trash Panda Hazy IPA is a Northeast style IPA that uses huge amounts of dry hopping, giving this beer complex notes of melon, tropical fruit and pear. Beer lovers who are already familiar with Filthy Dirty IPA will have a completely unique drinking experience with Trash Panda, as this new brew is lower in alcohol content (Trash Panda’s ABV is 5.5%, Filthy Dirty has an ABV of 7.2%) and uses a different variety of hops and malt, which effect the beer’s visible haziness and smooth mouth feel. Most noticeably, Trash Panda differs from Filthy Dirty in flavour profile: Trash Panda is a juicy IPA with mild bitterness, whereas Filthy Dirty IPA provides dank and aggressive amounts of bitterness. At 5.5% and 55 IBU, Trash Panda leaves a succulent taste and a velvety feel on the palate that will be sure to make a lasting impression on Parallel 49 fans everywhere.