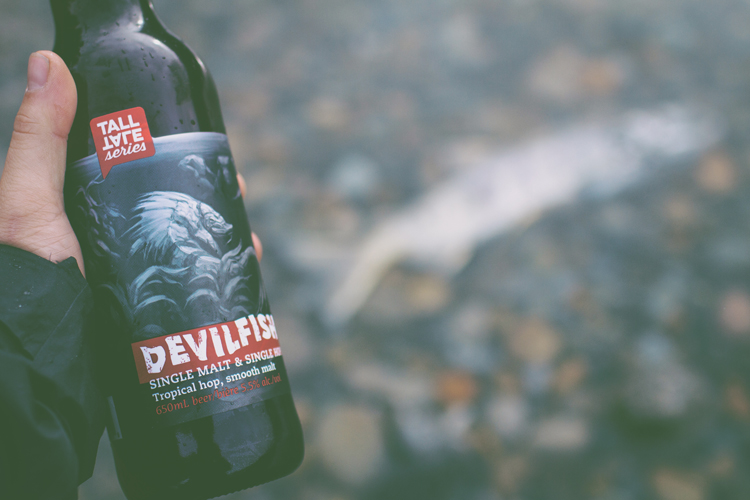 It has been 3 years since Old Yale Brewing’s Devilfish IPA was a part of their mysterious Tall Tale Series, and today, the beer has made it’s triumphant (but limited) return with its tropical hop character and smooth malty flavour.

“Our Tall Tale Series is made up with 5 of the first ever seasonal beers we created. Since then, we’ve introduced our Trailblazer Series and have been experimenting within that a lot lately. With recent releases of some other Tall Tale classics; our Yeti White Stout and Screaming Banshee Irish Cream Stout; Our Devilfish SMaSH IPA has been patiently waiting it’s turn. We decided that our 20th anniversary year was a phenomenal time for us to dig back into the archives and re-release this beer once again.”

This daringly simple IPA was crafted using on the essentials; special amber malt and Ella hops. The Devilfish’s tropical notes and smooth finish are best savoured with a spicy seafood dish.

“Our Devilfish is a SMaSH (single malt and single hop) IPA, allowing us to showcase two ingredients. In this case, it’s an Australian hop, Ella and Amber malt. Ella is the sister to the ever-popular Galaxy Hop (found in our West Coast IPA and Knotty Blonde Ale) but has a slightly different profile providing floral and spice when added during the boil, but tropical fruit character during dry-hopping. Amber malt as the name suggests, lends a slightly darker red tone to our Devilfish, while also adding a little extra malty toastiness to counter the heavy hop addition.”

The Devilfish IPA rejoins the ranks of Old Yale’s Tall Tale Series, exploring BC folklore and celebrating mythical characters that offer unique flavours, styles and stories for you to share with friends over a campfire. Their award-winning, dark and haunting, bold and smooth Tall Tales is yours to Explore, learn the story of the Devilfish at oldyalebrewing.com

Devilfish IPA is available now in 650ml bottles and kegs and will be sold in Private Liquor stores and at Old Yale Brewing. Visit the Brewery’s Store Locator tool to find a licensed establishment or retail store near you at www.oldyalebrewing.com. Or, stop by the brewery for a taste!