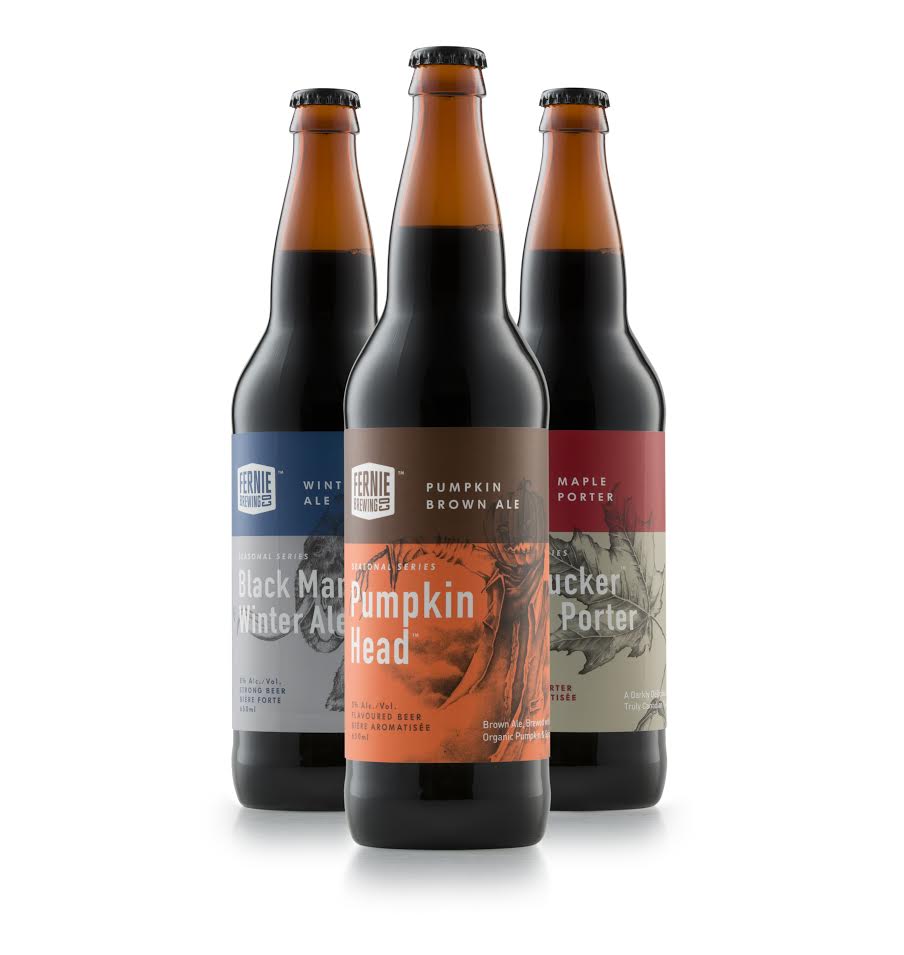 (Fernie, BC) – As one season simply hints at its departure, the next fast arrives. In mountainous Fernie it’s in the form of inclement weather, with dark and stormy seasonal brews to match the evening skies. Whilst cool mornings and dustings of snow appear on the mountains, inside Fernie Brewing Co. (FBC), old friends are spotted trundling down the packaging lines. It’s official, fall is here.

Of course, some of the usual award-winning suspects are back. Sap Sucker Maple Porter, the deliciously dark & robust Porter, with a delicate but flavourful touch of maple syrup. Made with 7 Malts including Chocolate, Black, Carmel & Crystal, with maple syrup added post fermentation, it’s a British/Canadian Hybrid Beer Style – Traditional London Porter with a hint of Canada! With IBU 35 and 5.5% alc./vol.

Proudly sporting a Gold and a couple of Silver CBA medals, it really is popular with consumers, beer bloggers and judges, who are looking for a uniquely rich and flavourful product. It’s available locally as of September 7th, in Alberta soon after, and the rest of BC late September, through until March. Think of it as your winter comforter.

To help bridge the gap and to ensure you have an appropriate accompaniment to your turkey dinner, Pumpkin Head Brown Ale also makes an eagerly awaited return. With the mouthwatering smell of pumpkin and spices wafting throughout the Brewery, seeing Pumpkin Head hit the bottling line, was a welcome sight to many an FBC employee. Thorough taste testing ensued, and suddenly those crisp fall mornings didn’t feel so bad.

Pumpkin Head stems from their infamous First Trax Brown Ale, but is instead brewed with organic pumpkin, cinnamon, nutmeg and numerous spices. Resulting in a brew fit for any beer connoisseur or your average turkey aficionado. Unfiltered to keep the real pumpkin taste alive along with its Brown Ale roots, with IBU 13 and 5% alc./vol. It’s also available locally as of September 7th, in Alberta soon after, and the rest of BC mid-September, for a limited time only. Stockpiling is not frowned upon, (and positively encouraged), to tie you over until the Black Mammoth Winter Ale returns late November.

To accompany these two returning, popular brews, Fernie Brewing Co. teamed up with Red Tractor Farms Inc., an independent sustainable farm, located in the heart of the Skookumchuk Prairies, near Kimberley, BC to brew their first fresh hopped beer. With the tight time restraints between harvesting and brewing, being located in the heart of the Rocky Mountains does not make this an easy feat. Luckily however Jim Sidorchuk and Tracy Bruns have a passion for farming, the outdoors and good beer! The climate and soil on their land are favourable for growing hops and as the market for locally grown BC hops are in high demand, it was an easy decision for Jim and Tracy to start their 2 acre hop yard. With FBC being their first recipient.

“We are so excited and honoured to be able to supply our locally grown organic hops to Fernie Brewing Co.,” says Jim. “We will be hand harvesting our Cascade and Nugget hop cones and will deliver direct to FBC within a 12 hour window so they can brew their very first locally grown wet hop IPA.” Success, as at 3AM this morning, Red Tractor’s first hop delivery arrived and was promptly put to the most excellent of uses. Of course you have to wait a while before the results can be enjoyed, but the Fernie Brewing Fresh Hopped Pale Ale will be available, draft only, throughout BC and Alberta, late September, until stocks last.