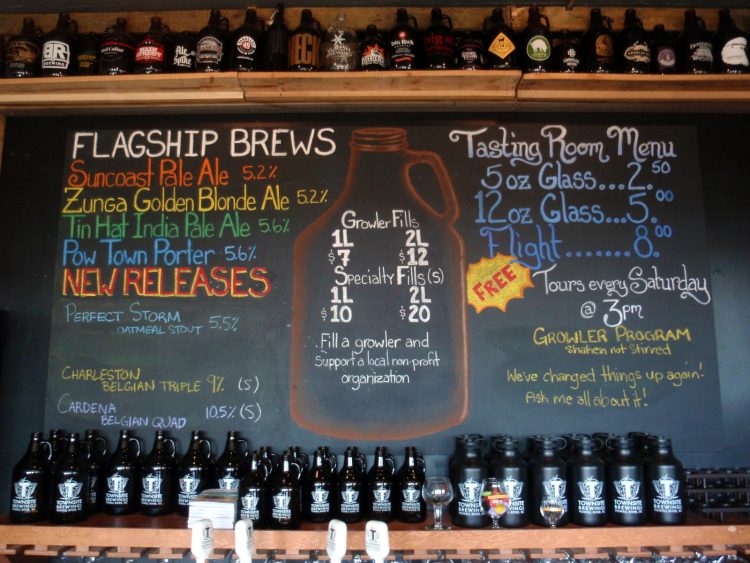 Since opening their doors in 2012, Townsite Brewing of Powell River has become a pivotal member of the BC craft beer community.

Townsite is well known and respected for the creations by their Belgian-born brewmaster, Cédric Dauchot. As they mention on their website, “If there is one thing Belgians know, it’s how to make really great beer; and [Cédric is] excited to bring some Belgian flair to the west coast.” The core beer lineup is:

Townsite is well known for its participation in the local community, and the way the community has embraced them. Co-Owner Michelle Zutz says, “We get to live, work and play in this amazing region with such a diverse group of people to call neighbours and friends. We buy our homes here, pay our taxes, spend our dollars, our kids go to school here, take driving lessons, swim and dance class­es. Our customers see our faces in the community supporting both personally and professionally and that makes all of us feel connected.”

Evidence of this is Townsite’s 2014 Community Activism Award from the Campaign For Real Ale Society of BC. CAMRA BC operates a chapter in Powell River. Without Townsite, that would be impossible.

Townsite’s “Growler Program” supports local nonprofits and their initiatives within the region. Beneficiaries receive $1 from the sale of every growler and refill sold. Townsite also works with them in promoting their individual programs, and makes their tasting room and other space available to them to use in selling event tickets, promoting fundraisers and so on. See their website for a current list of recipients. 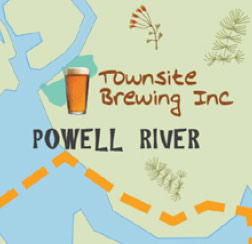 Powell River is one of the natural junctions along the Sunshine Coast/North Island beer tourism route. As a result, Townsite has been a great supporter of the BC Ale Trail initiative. And it’s no wonder, because Townsite’s existence has been instrumental in convincing many tourists to make the trek to Powell River. Certainly, events like the CAMRA Powell River beer festival would not have developed without the existence of a local brewery. But beer visitors don’t stop in just one a year; tourism is a significant ongoing segment of Townsite’s traffic.

Powell River Councillor CaroleAnn Leishman relates a story about being away at conference. When she mentioned she was from Pow­ell River, instead of the usual “Mill Town” reaction, she was overjoyed to hear “You guys have that great brewery and all the biking trails! I’ve heard all about Powell River! I want to come there for a visit soon!”

Chloe holds a Bachelor of Chemistry and a diploma from the American Brewers Guild and has worked in industrial breweries as well as brewpubs. Chloe Likes: Cross Country Skiing, knitting in the round and Belgian IPAs. Motto: You gotta roll with the punches.

What’s Brewing profiled Chloe with this biography in our Summer 2016 issue:
https://www.whatsbrewing.ca/2016/05/theres-chloe-for-you

Chloe is also an author! Check out her handiwork in the story Fathers Of BC Brewing, published in the Spring 2017 issue of What’s Brewing.

Cédric graduated from L’institut Meurice in Brussels in 2004 with an Engineering degree in the science of Brewing. Head of Brewing operations for les 3 Brasseurs Canada from 2005 – 2010, he has as done it all, from Interbrew to Homebrew. Claim to fame: has two cases of Westvleteren 12 aging in his fathers cellar in Belgium. Plus, he married Chloe.

Michelle is a straight-shooting, wise-cracking, determinedly country mother of three, energized by the passion of her commitments. She is irreverent, boisterous and out-spoken. Her enthusiasm for her kids, community and company are evident in her zest for life and infectious good cheer. Give her a call, mention beer…you’ll see!
Fun fact: Michelle’s rich and diverse cultural forays into beer consumption in nine different countries (so far) lead her to conclude: Townsite’s where it’s at, baby!

Uli relocated with his partner from Vancouver in 2011. Uli  started with Townsite Brewing by assisting Cédric assemble the brew house, and frankly, just never left. Ulrich delivered TBI’s first kegs to the thirsty folks of Powell River and beyond in the back of his Ford Ranger. TBI has since upgraded to a Benz Sprinter and Uli has retired his old Ford.
Likes: Being outdoors enjoying the amazing beauty of Powell River, working in his garden and entertaining friends.

In 2017, Townsite is expanding their tasting room. See the full story in the Powell River Peak,
http://www.prpeak.com/business/townsite-brewing-success-spurs-expansion-1.13269077

Here are a few Townsite images from the What’s Brewing archive.