Every three months, What’s Brewing huddles with Jordan Knott of Legacy Liquor Store to source out a batch of beers that match the seasonal theme of our next magazine, but which are also available well in advance, for our panelists. When we’re lucky, we get six great examples of a perfectly vertical seasonal niche, created by six BC brewers. It’s never a slamdunk folks. Jordan’s done well this round. Tasked with finding a set of wheat beers, he’s come back with a sextet that includes witbiers and whites.

Along the way we eliminated other wheat beers that were available, but wouldn’t have fit the tasting. At one point we were shooting for a Hefeweizen six-pack, but some of these summery beers just don’t come out until summer. Thing is, we couldn’t just grab a couple of Hefs, a couple of Wits and a fruity North American-style wheat beer or two and call that a group, convenient as that would have been. Let’s dive deeper into why that is.

This issue, our Panel evaluates beers made with wheat which fit broadly a category called White. This beer tradition hails from Northwestern Europe, specifically the Low Countries (where the Dutch term Witbier, or “white beer” is used) and Northern France (where the variation is Blanche).

Germany is another country that has a tradition with wheat beers; most of theirs are substyles of Weiss (white) or Weizen (wheat). The reason we don’t mix German styles with Low Country styles is historic: for centuries, German beers have included hops but no other additives, while in 14th century France and Belgium, hops were prohibited and flavouring was accomplished via gruit, a spice mix often including coriander and orange rind. As a result, despite the similarities in naming, the approach and flavours of Belgian and German white/wheat beer styles are so different that we would never mix them in a vertical tasting.

YOUR CONGENIAL HOSTS ARE:

Warren Boyer, BJCP-Certified home and commercial brewer, and past President of CAMRA Vancouver.

Note: neither What’s Brewing nor Legacy Liquor Store bear responsibility for the opinions expressed within, which are solely those of the individual panelists..

– created from the descriptive terms chosen the panel in their reviews –

Additional note: two of the reviewers (Lynn and Carnell) made best effort to judge blindly (ie, worked with a partner to conceal which beer was being sampled until scoring notes were taken). 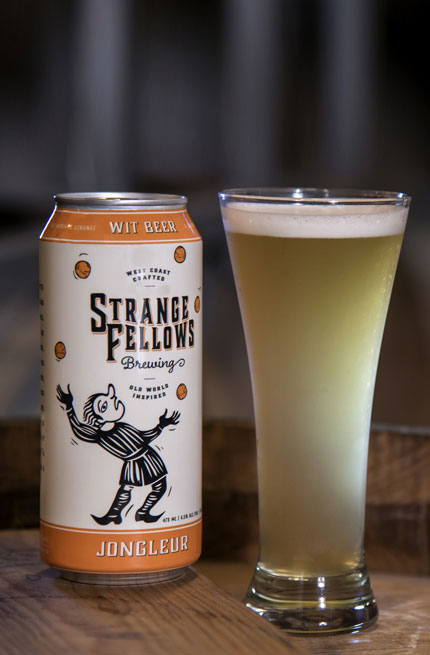 This round features submissions from some breweries known for their interest in styles from Belgium and surroundings, which is fitting for the theme we chose. You can see that the scores were pretty much neck and neck! Nobody did especially well or poorly (see next page).

When Strange Fellows co-owner Iain Hill was planning his current brewery, he strongly considered branding it as “Low Countries Brewing” due to his interest in beers from the region. So it’s only fitting that they have taken the ribbon this round for a witbier, a style they began offering pretty much right out of the gate when Strange Fellows opened.

Note: Panellists are instructed to give an honest rating. Neither What’s Brewing nor Legacy Liquor Store bear responsibility for the opinions expressed within, which are solely those of the individual panelists.

A general overview of how these beers did as a group. Pie chart tip: start at top of legend and work clockwise from 45 degree mark (3 o’clock).