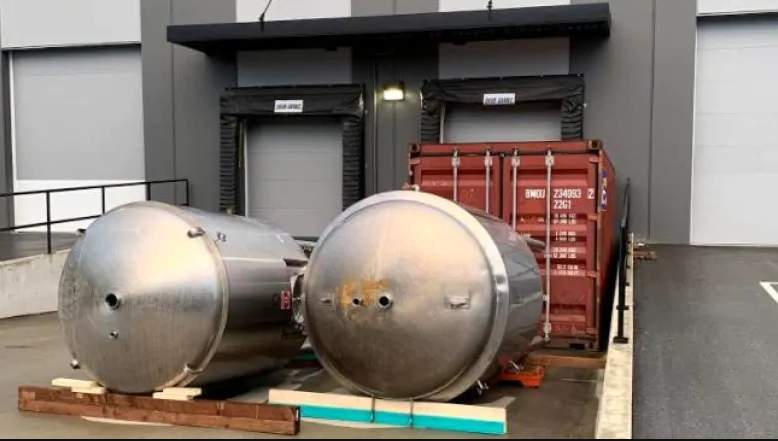 We are starting this week with some pretty crappy news. The owner of Port Coquitlam’s upcoming Boardwalk Brewing came into work on Monday morning to find that someone had taken off with two large fermenting tanks that were being stored in their loading bay. The tanks were outside because they were finishing up the floor build and they were supposed to be moved inside this week.

The tanks are worth about $20,000 each, measure 12 and 14 feet in height by 5 feet in diameter, and weigh around 1.3 tons. To move them correctly, they say that you would need a crane truck or forklift with extensions.

Obviously it’s very hard to steal something of this size without anyone noticing, so the RCMP is working with local businesses to review any security footage of the area. Other than breaking them down into scrap, it will be hard to sell these locally in such a tight-knit community, so hopefully someone will turn these guys in if they try to sell them on.

If you know anything at all about this theft, please send any tips to [email protected]

Now on to a bit of good news. The City of North Vancouver council has voted unanimously to make their public drinking pilot project permanent, with a couple of adjustments. Civic Plaza has been removed from the list of designated areas, due to a number of noise complaints that resulted in the police being called, and the hours have been reduced to 11 a.m. to 9 p.m.

This is great to see. Hopefully we will see more of these projects extended. Sadly, here on Southern Vancouver Island, they didn’t even bother with a pilot project.

A dollar from every 4 pack or 50 cents from every pint of the ale goes towards the PG Humane Society, to help with the ongoing care of the animals at the shelter. They also held a fundraiser last Saturday to launch the brew.

The Craft Beer Marketing Awards (CBMAs) has announced its 2021 Awards Program is expanding and will accept entries from around the world in beer, hard seltzer, and cider. Categories will be broken up into five regions: The Americas; UK, Europe; APAC – Asia & Pacific (including Australia & New Zealand); MENA, Africa & Beyond.

This year they have also added timely categories for Pandemic Marketing and Human Right Awareness. Entries are open from October 1, 2020 and will be accepted through January 29, 2021. Breweries can submit their entries here.