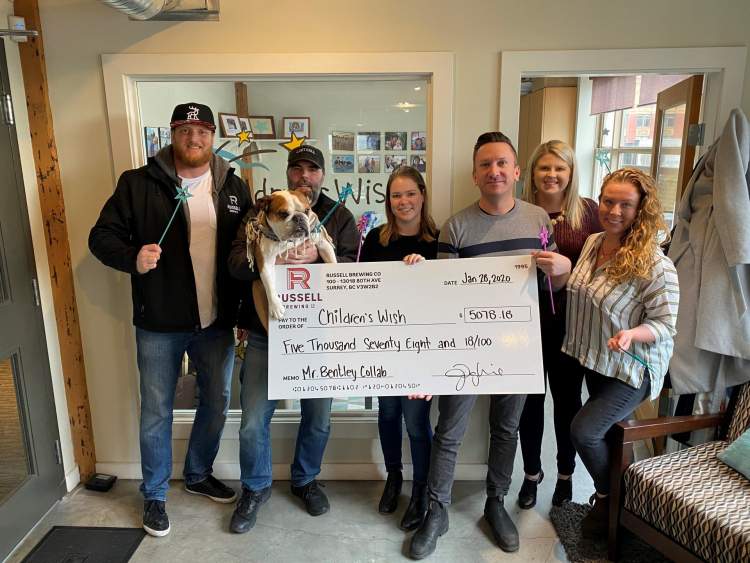 Royston Nano Brewery is a charitable initiative based in Royston, BC, which was founded by physician Brad Harris with the goal of giving back to the organizations that helped his family when his daughter was being treated for Leukemia.

A few years ago, Brad brewed an amazing hazy IPA called Love Potion that sold out in no time at all. I sent some to a few people and they haven’t stopped asking about it after three years!
Good news, because it’s back! He’s brewed up a new batch with Ace Brewing and it will be available on draught at the tap room this Friday. All proceeds from the sale of the beer will be split between YANA Comox Valley and BC Children’s Hospital Oncology. Check the events section for more info or read the full story here.

On that note, remember the cucumber sour that Russell released a few months back in honour of Mr.Bentley the bull dog—the moon-walking, helicopter co-piloting, cucumber eating internet sensation?
Well, they donated partial proceeds from each can and keg sold of that beer to Children’s Wish BC and this week were able to present the foundation with a cheque for $5078.18. Good going, guys!

Hot on the heels of Calgary’s Wild Rose Brewing selling to Sleeman last May, one of the city’s newer breweries, Banded Peak, has just been sold to Labatt— itself a subsidiary of mega-corporation Anheuser-Busch InBev. The sale comes as a surprise to some, as the brewery was only founded in 2016, but Alberta’s craft beer industry is booming right now, so I imagine many craft breweries are receiving attractive buy-out offers right now.

Labatt is keeping the staff on and say that they will maintain the brewery and tasting room as a separate entity, so hopefully the beer won’t change…

According to Maclean’s, Archaeological anthropology professor Marie Hopwood and her team at Vancouver Island University in Duncan, B.C. have been brewing ales based on recipes from around 5,000 years ago.

Their creations, with names like Midas Touché, Odin’s Eye, and Chosen Chicha, are available to purchase from LoveShack Libations in Qualicum Beach, as well as VIU’s on-campus restaurant. The brews have been so popular that they have had to put a limit on the amount of bottles per customer. I’d love to check those out!

In Tribute to a Maple Ridge resident Jordan McIldoon, one of 58 killed in a 2017 mass shooting in Las Vegas, Five Roads Brewing in Langley has renamed their Jimmy D’s ESB to Jordy Mac’s Work Hard, Play Hard ESB.

Apparently he was was incredibly active, with a passion for BMX and mountain biking, and was even a certified bicycle mechanic. He lived every day by the words, “Work Hard, Play Hard.” A fitting tribute indeed!

It sounds like something that can’t possibly be true, but according to Google Trends, there has been a drastic increase in searches for “Corona beer virus” and “beer virus” since January 18, implying that some people are linking the outbreak of the deadly virus to the Mexican lager.

I really hope that Google’s automatic suggestions have something to do with this. Oh well, at least it’s not being linked to craft beer!

Meanwhile in Victoria, the police were called on a man who was enjoying a beer on a bench outside of a grocery store. When they asked him to stop, he declined and continued drinking. The officer then proceeded to write him a $230 ticket. When interviewed he said, “I’ve paid too much for a beer before but I’ve never come close to that. It’s an expensive lesson but only time will tell if he learned from it.”

I swear this wasn’t me, but I do this all of the time. As long as you aren’t shotgunning a six-pack and causing a disturbance, where’s the harm? When I went to Brussels last year, there were people dressed for the office and enjoying a brew while heading to work, and their society seems to be functioning just fine, thank you!