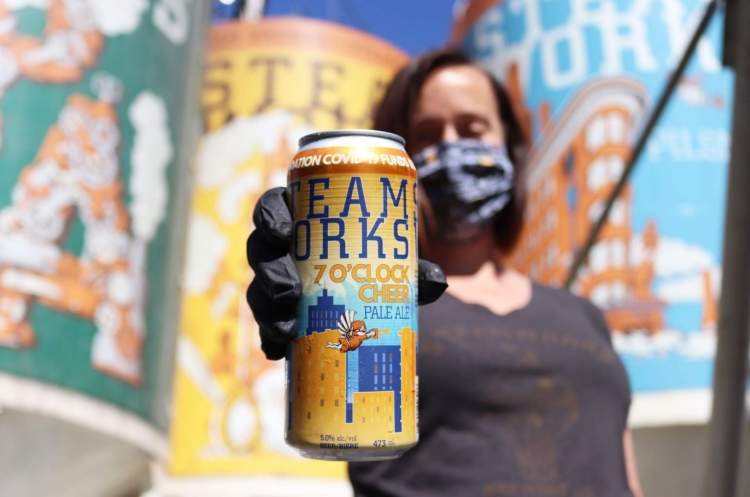 Steamworks Brewing in Burnaby has released a special new beer called 7 O’clock Cheer. This pale ale was brewed with all local ingredients and materials donated by Gambrinus Malting, Hops Connect, and Westkey Graphics. 100% of the net proceeds from this beer will be donated directly to VGH & UBC Hospital Foundation’s COVID-19 response and research fund—providing supplies and support to our healthcare workers and funding research.

This week, Parallel 49 Brewing revealed that their Ricky Gervais-inspired Ruby Tears fundraiser has raised a total of $8000. The beneficiary of the funds will be Happily Ever Esther Farm Sanctuary, where the dads of Esther the Wonderpig rescue and rehabilitate abandoned and abused farm animals.

V2V Starts a Go Fund Me

This one seems to have fallen off the radar, but the Times Colonist reports that V2V Black Hops Brewing in Langford started a Go Fund Me campaign in April. The brewery opened its doors right as the COVID-19 shutdowns started to kick in, so they have only been able to pay their landlord 35% of their monthly rent for April and May. They say they will likely be expected to pay 50% more in June, but with beer sales far lower than expected under normal circumstances, they might have to sell the brewery!

The Drake is Open for Pick-up

Good news for Victoria beer lovers this week, as The Drake Eatery & Beer Parlour has reopened for take-out orders, with a view to open properly once health officials give the green light. They have their food menu listed online and are canning select draught beers to take home with orders. I can’t wait to go there again!

It only took a global pandemic to do it, but it looks like the province is trying to give the hospitality industry something it has been after for many years. Attorney General David Eby has confirmed that Premier John Horgan has asked him to act quickly on two urgent requests: providing wholesale prices for hospitality licensees, and expediting provincial approval for patios and expanded outdoor liquor service.

As it currently stands, pubs, bars, and restaurants have to buy liquor at retail prices and getting approval for a patio can be a bit of a nightmare, from what I hear.

This is an excellent move that will hopefully provide a little extra support as businesses begin to open up again.

A little cautionary tale to end the week. After Heineken and Grupo Modelo suspended production last month, due to Government restrictions on non-essential activity, the supply of beer in Mexico began to dry up. It seems that people have turned to bootleg alcohol as an alternative, much of it containing Methanol, which can cause serious adverse affects when consumed. In the last two weeks over 100 fatalities have been reported!

I wonder if the same would have happened here if they had closed the breweries down?