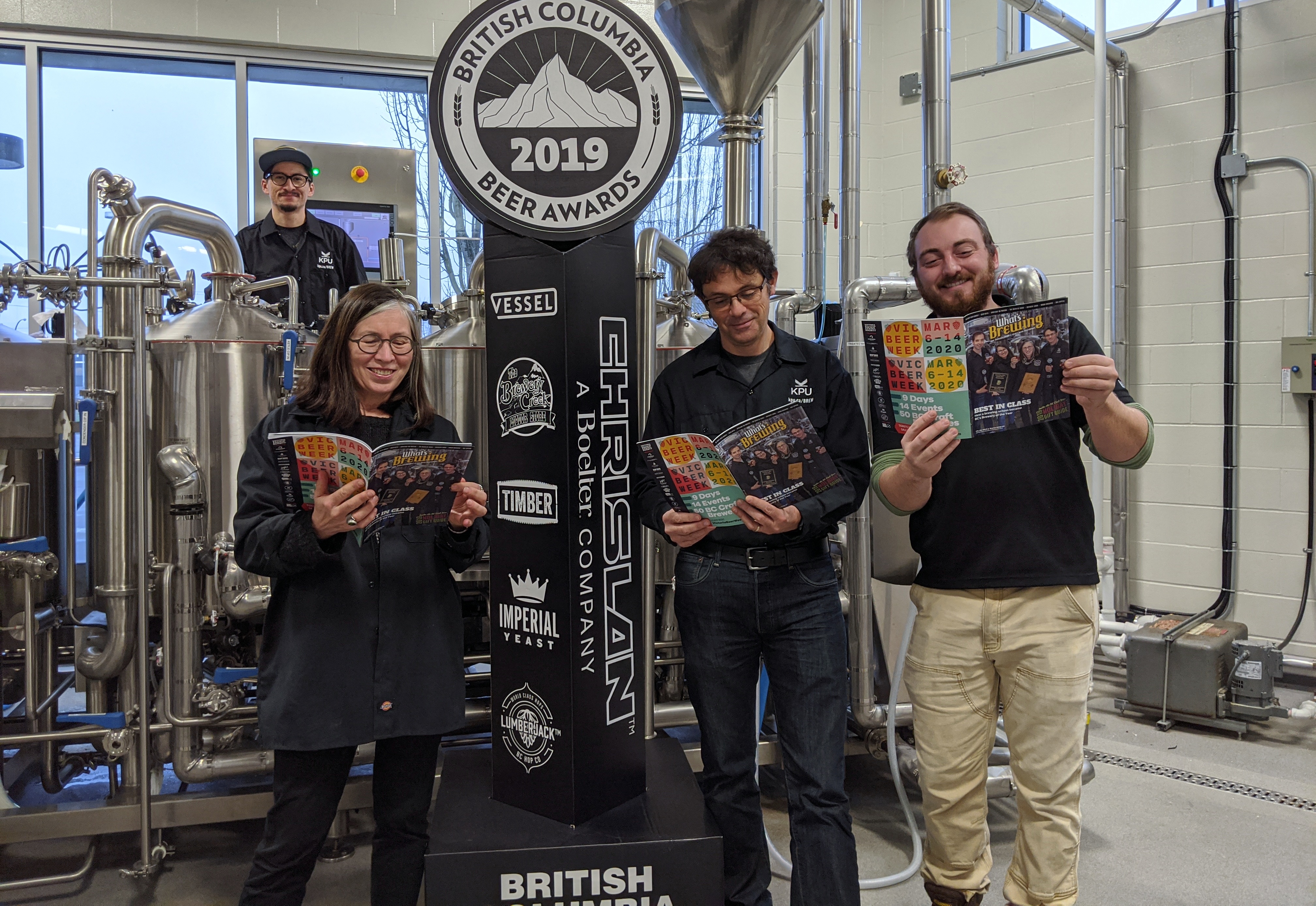 This week, What’s Brewing released its Winter 2019 issue, featuring a number of cold-weather topics like a spotlight on BC Porters and our Holiday Gift Guide, including a look at beer books with Ted Child (preview below).

Also, we feature the interesting journey of the Brewing & Brewery Operations program at Langley’s Kwantlen Polytechnic University, which was named BC’s Brewery of the Year at October’s BC Beer Awards. That’s a great segue into a topic of interest for today’s newsletter.

In your latest copy of What’s Brewing, you’ll find a preview of some key results from sister website Beer Me BC‘s 7th annual BC Craft Beer Survey. During December, we will be publishing results from the survey as part of its 2019 Year In Review series.

We won’t scoop the full official announcements, but for sake of interest, here’s a quick comparison of some key results for the year 2019. For this, let’s contrast this year’s BC Beer Awards, which is a formal adjuticated competition by experts, versus The Growler‘s ‘Growlies‘, which is a pre-curated public survey, and Beer Me BC’s survey, which is a wide-open write-in vote. All are great in their own way. How do the results compare? Turns out that the surveys were in perfect lockstep.

New this year but not shown: we added a survey question about cider. Topping the votes were Island-based Sea Cider and Merridale. This would be one area that would be good to see served by the other beer awards.

As you can see, it’s hard to avoid Driftwood Brewing’s Fat Tug IPA in a public vote for Favourite Beer. However, in the Beer Me BC results, which get quite deep, we’ll be detailing a number of others in our Top Ten, which will include beers from the likes of Superflux, Twin Sails, and two each from Yellow Dog and Four Winds. Stay tuned to Beer Me BC as we roll out full results, not only of People’s Choice but of other data about BC’s craft consumer preferences.

As you see, the BC public (OK, there may have been a lot of Lower Mainlanders) has voted North Vancouver’s House of Funk the best newbie in 2019. But Ryan Tessier of the excellent beer blog Ale/Sessions has compiled his own list of the top rookies of the year. Check it out here →

Four Winds Brewing has remodelled and expanded their tasting room! Maybe not quite the level of expansion they were looking for this year, but to be celebrated nonetheless. Full story →

Vancouver Is Awesome broke the news that the city’s largest craft beer bar is going to get a bouncing baby sibling in the West End, probably next year. CRAFT Beer Market is taking over the old Boathouse restaurant in English Bay. Full story →

Looking for holiday gifts with savings to boot? Last week, we provided a comprehensive listing of Early Bird sales on 2020 beer events. As of this coming Wednesday Dec 11, add North Vancouver’s BC Cider Fest to that list. Announcement →