It’s another massive week for events. As North Shore Craft Beer Week winds down, Fresh Hop events take place this weekend in Victoria and Vancouver. Ed Kaye has the curated roundup below.

With BC Craft Beer Month underway and the hop harvest in full swing, it’s a perfect time to talk about hop producers like Northwest Hop Farms. Check out our Community Spotlight interview with co-founder John Briner, below.

By the time you receive your #Hopline next week, the BC Craft Brewers Conference will be ready to kick off. But that’s not all that’s happening. The sold-out BC Beer Awards will take place on Saturday the 19th in Vancouver. That same day, Penticton Beer Week launches.

But before any of that happens, on Tuesday the 15th, your favourite beer magazine will be hosting a special event at Legacy Liquor Store called An Evening with the What’s Brewing Tasting Panel. At last count, there were only two tickets left for sale. Snap them up here if they’re still available → 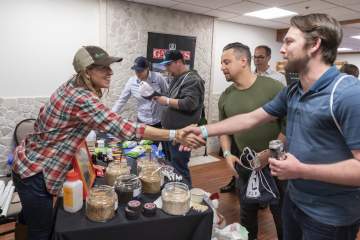 Each fall during BC Craft Beer Month, the BC Craft Brewers Guild organizes the annual BC Craft Brewers Conference for its members and their many friends in related industries around the province. It’s not just for brewers; anyone who is a fan of the BC craft beer industry, or who would like to become part of it, can benefit from what they will learn by attending. For Year 3, the BC Craft Brewers Conference has taken a giant leap forward with a new website and a substantially expanded format. Beer Me BC has a breakdown of the most impressive ways the Conference has grown this year. Get the full story here →

BCBeerCon Needs Volunteers. Work your way in the door! Roles include (but are not limited to): Greeters, Coat Check, Registration (ticket scanning, wrist-banding and guestlist), Bar Staff, Set up and Tear Down Crew. More details / sign up here →

Whether or not you’re headed to the BC Beer Awards, you can get in to the First Annual BCBA Brewer’s Brunch the next morning on Sunday, October 20th. There’s no better cure after an evening of indulging in our province’s best brews than keeping the party going. View event →

For some time, Penticton has been recognized as one of Canada’s best beer towns. Now, it’s all coming together during BC Craft Beer Month as the city gets set to launch its very own Beer Week on Saturday the 19th. Full story → 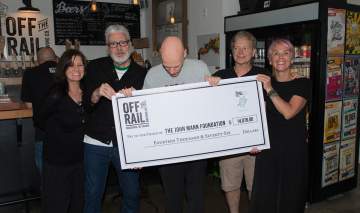 Hats Off to Off The Rail!

Since launching Spirit Lifter Pilsner last June, Off The Rail Brewing has donated $14,000 in support of Spirit Of The West’s John Mann and his family as he continues his battle with Alzheimer’s Disease. A cheque presentation recently took place at Off The Rail with Mann and Jill Daum, band member Geoffrey Kelly and friends and family of the band. Full story →

FOE Creative does primo work for the craft beverage industry around BC and beyond. Check out what they said here →

End of an era in Langley

As we’ve reported before, Langley has become a new nexus of craft beer in the Fraser Valley. One of the reasons for that was a tiny oasis of nuanced brews called B’s Craft Beer Lounge, operated for four years by the Berezan Group as an annex to one of their liquor stores. As a craft enthusiast breeding ground, it was the Langley equivalent of Spinnakers in 1980s Victoria and Dix BBQ & Brewery in 2000s Vancouver. In current terms, despite its small size, it was the closest facsimile in the Fraser Valley to Alibi Room or The Drake.

This past Saturday October 5th, friends and fans gathered to mark the last weekend before B’s was shut down. The guest of honour that day, former tap wrangler Mike Klemak, will be moving to Camp Beer Co.  Photo album →