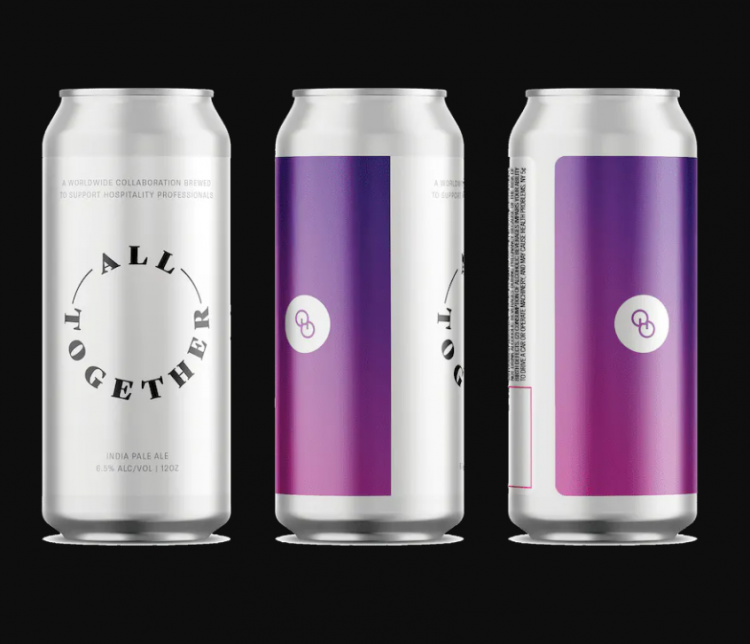 The amazing Other Half Brewing in New York has started a worldwide beer collaboration called All Together—created to raise funds and awareness for the hospitality industry.

#AllTogetherBeer invites any brewer, from any corner of the planet, to participate by providing the tools needed to make the beer at the lowest possible cost, including an open-source recipe, artwork, and name. In exchange, the collective asks that a portion of the proceeds go to supporting hospitality professionals in each brewery’s own community. The rest should be donated to keeping the brewery in business to weather this storm.

In BC, two breweries have taken up the call, being Superflux Beer in Vancouver and Neighbourhood Brewing in Penticton. Partial proceeds will go toward supporting Vancouver Food and Beverage Relief Community Fund and BC Hospitality Foundation respectively.

We might all be worried about losing some of our favourite breweries over the next couple of months, but the small village of Salmo in the West Kootenays just gained one! Founded by brewer Colin Hango, Erie Creek Brewing opened for business last weekend at 117 4th St.

Patina Brewing, which recently opened in Port Coquitlam has announced that they will share 15% of all proceeds of their food and beverage delivery sales for April 9, with Share Family & Community Services, which runs the Tri-Cities’ three food banks, including one in Port Coquitlam. In addition, owners Erin and Greg Moore will match the donation for a total of 30% of all revenue.

If you are in the area, be sure to order some BBQ and beer tonight to help out a good cause!

With everybody stuck at home and the bars closed, it seems that a lot of people have turned to homebrewing. Global News reports that homebrew supply stores are seeing a substantial uptick in business since we were all directed to shelter in place.

Brian Janzen, owner of Centennial Homebrewing Supplies in Vancouver is quoted as saying, “About three weeks ago, we got a tremendous spike in sales. We opened up and it was triple the amount of business we normally saw that day. Since then, it’s been steadily up.”

… and now for a bit of doom & gloom. Last week, the Brewers Association launched their second survey designed to gauge the impact of the current COVID-19 pandemic on the industry.

They received 455 responses from breweries across 49 states and 46.4% of respondents said that they foresee having to close within one to three months, while 12.7% said one to four weeks, and 2.5% plan to close imminently. There are 8,150 active breweries in the US, so this could indicate that we may see up to 5,020 US breweries closing within the next three months.

I know we are all focusing on buying local right now, but when you are at the liquor store making your choices, don’t automatically dismiss the US craft imports. Remember, they are small businesses too!

BC breweries have been very fast on their feet in setting up online stores to get beer delivered to our doors, but Portland’s Great Notion Brewing is taking it one step further. They are planning to launch an app that will serve as their primary virtual location, allowing consumers to order their beer, earn rewards, and learn more about their favorite can art characters.

Apparently, in a future iteration of the app, you’ll even be able to “unlock” characters to spend time with you while you’re drinking. Crazy!

While many breweries might be facing closure, Great Notion is still selling out of all product and are adding four new tanks, a whirlpool, and a centrifuge. They sold 5,000 barrels last year and were planning to sell 10,000 this year, but think it may be more like 7,500. They’re even opening a new location in Seattle later this year!

Remember when we were all joking about getting Coronavirus from drinking Corona? It doesn’t seem so funny now, but in an odd twist, the virus has actually stopped the flow of its namesake beer, as Grupo Modelo’s 11 breweries were deemed as non-essential business by the Mexican government.

To wrap things up, I just wanted to give a quick shout out to our friends at Smiths pub in Victoria. Yesterday they reopened for take out and delivery. From Tuesday to Saturday (4 pm-9 pm) you can order food from their kitchen and get a 1L mason jar of beer to go with it. Check out their website for details.