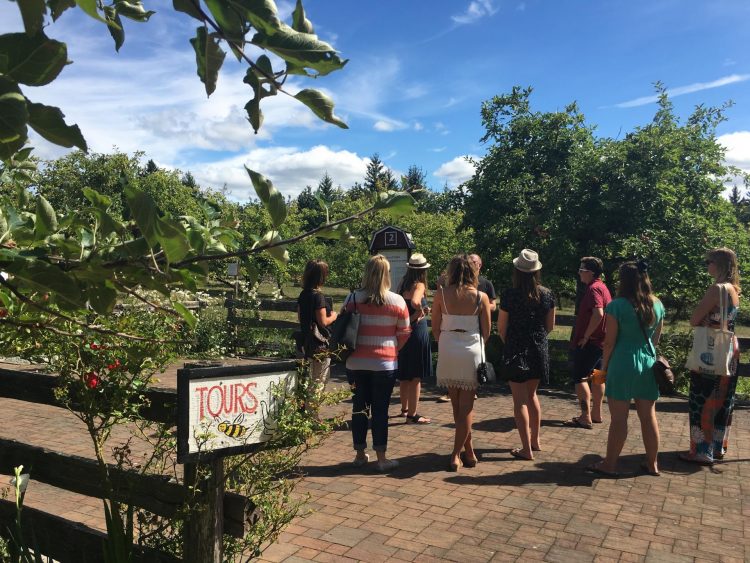 Just because it’s tucked away, doesn’t mean it’s a secret. Locals know all about the amazing experiences that await on the Merridale grounds, including touring their beautiful apple tree orchards, enjoying their idyllic setting, tasting their ciders and spirits in the taproom, dining on their patio or in the eatery, or exchanging nuptials at one of BC’s most-desired wedding locations.*

Merridale is a team of people who are passionate about what they do and how they do it. We focus on traditional methods and practices with some innovation to ensure that we never compromise the end product. We are proud of everything we make and we want you, our customer, to share in our passion and pride. Let’s find out more about what awaits a visitor to Merridale.

Merridale uses cider apple varieties that have been proven for centuries in England, France, and Germany. Their orchards produce a wide range of bittersharp and bittersweet apples allowing the creation of a distinctive variety of products, like the House, Merri Berri and Traditional. Some, like Scrumpy and Cyser, are rich in history from medieval times of Olde England. Each of these ciders is a blend of apples aimed at a particular palate. They’re designed to be enjoyed as a glass or a pint, with or without food.

No pesticides are used in growing Merridale’s apples; they hand-weed their orchards. No water is added during production, and there is no “re-pressing” of apples to increase the yield. Also no concentrates, no chemicals at bottling, and no fine filtration; just (yes!)100% pure first-pressing apple juice, fermented slowly and naturally.

Merridale: A Story Of Apples And Passion

Make a meal in the eatery the centerpiece of your Merridale tour experience. On a large patio overlooking the orchard, you will find plenty of room to sit with friends while you sample ciders, and other craft beverages made by Merridale and friends. Indoors, you’ll find spacious tables situated around a traditional fieldstone fireplace, steps from the tasting bar. The menu evolves with the seasons and is inspired by nearby Cowichan Valley farmers, vintners, and cheese-makers

Visit the farmhouse store to browse a selection of fresh baked goods from their brick oven, as well as delicious sauces, jams, and preserves created by Merridale’s culinary team. You will also find apple blossom honey, apple cider vinegar and other favourites that have become famous locally. View the ingredient lists for their in-house products.

A brick oven is used to bake breads, pastries, apple pies, and special occasion menus. From late spring through early fall, they also make pizza. It’s a local tradition to relaxi in the orchard on one of their decks, listening to soft guitar music while savouring their famed brick-oven-baked Sunday Night Pizza–a little taste of heaven.

They had a head start, because the distillery was started back in 2007, well before the current trend. The distillery’s creation involved years of research and study in small-batch spirit making, including a few “field trips” to England and France. They acquired a 200 litre Mueller hand-hammered copper pot still from Germany, designed to preserve as much as possible of the aroma and flavour of fine fine fruit juices they create spirits from.

Fermenting and distilling these juices is an art unto itself. The sweet nectar released during the distilling process is known as ‘Eau de Vie’, or water of life. Their brandies are aged slowly in carefully-selected oak barrels in accordance with traditional French methods to create the luscious caramel colour you see in these bottles.

Find our contact information on this page to book your visit to Merridale. They look forward to seeing you! In the meantime, here are a few images that will keep you thinking about what awaits you in Cobble Hill.

On the horizon for Merridale is a completely new project: a brewpub and whisky distillery in Victoria’s Dockside Green district.

Crafting award-winning cider & spirits in Cowichan Valley. EAT at the eatery, DRINK at the tasting bar, & BE MERRI at the perfect farm-style wedding venue!
*Please note: we are not currently taking reservations for groups of any size and don't currently have group bookings available.