Every three months, What’s Brewing gets together with Legacy Liquor Store to create a new installment of our Tasting Panel series. Our Fall 2019 round features West Coast IPAs.

We showcase each launch on Just Here For The Beer Radio. Fall 2019 episode here →

We’re proud to also work with Pacific Beer Chat to review and showcase our sextet of BC craft brews. Check out the podcast episode here →

A year ago, for the first time, our Panel reviewed IPAs…but we had trouble finding any that weren’t of the “new school.” This time we made it a point to review the two venerable stalwarts that brought highly hoppy beer into BC’s mainstream a decade ago, while including some more recent examples from relative newcomers.

LOOKING BACK THROUGH THE HAZE

There was a time when you could see through an IPA. Then in 2016, Steamworks Brewing and its head brewer Julia Hanlon took “Best In Show” at the BC Beer Awards for Flagship IPA, the first successful BC example of a style called “New England IPA”, and it became a rage. We awarded Julia “Brewer of the Year” in our end-of-year recap for opening a new door. We didn’t know it was a Pandora’s box.

The beers of this new style were hazy; not just unfiltered but thick and pulpy. They had hops but didn’t seem bitter; they were sweet and juicy. Soon it would become impossible to find a new IPA release that was not Hazy or Milkshake. The formerly proud West Coast IPA lay in wait, pining for the day a hoppy backlash would restore it to its rightful throne. 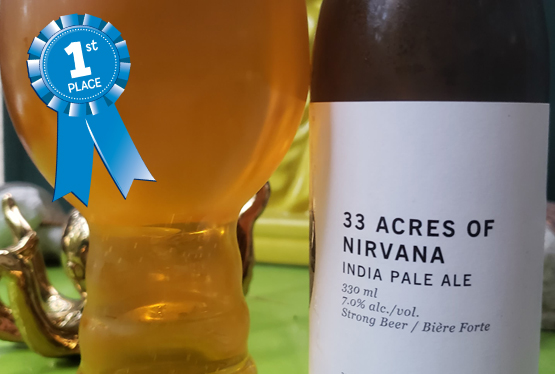 33 Acres of Nirvana takes our blue ribbon for being fresh and interesting but staying close to the West Coast IPA style. The brew is a return to days of yore, when North American IPA broke away from its English ancestor by using bold, fruity, floral and piney Northwest hops, and ramping up the IBUs.

All beers scored at least 20 points this round, which is a very solid showing.

SCORES FOR THIS STYLE GROUP

Got questions about craft beer? Talk to Chris!