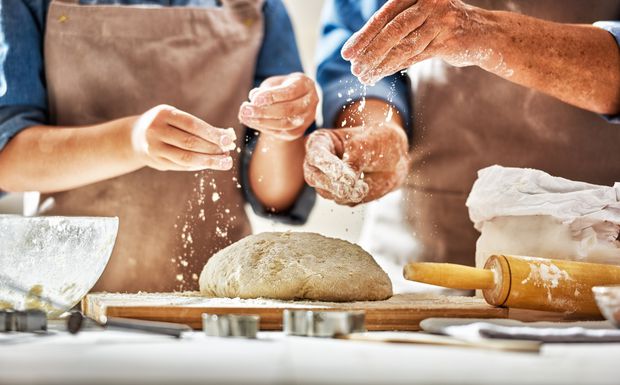 On a snowy Tuesday night in February, 17 sourdough enthusiasts crowded into the kitchen classroom of Calgary’s Cookbook Co. to learn secrets from one of the city’s best-known bakers.

Attendees passed around a bucket of sour-smelling, bubbling goo, each taking a whiff of its clean, briny scent as Aviv Fried contemplated where the community of bacteria and yeast in each sourdough starter (a mixture of flour and water that eventually gets inoculated with wild yeasts) originate. They could come from the air, as bakers in San Francisco believe, or the surface of the grains ground into flour (which Fried believes is most likely), or even from the bakers’ hands.

Fried is a scientist by training; he earned his master’s degree in biomedical engineering, but strayed from his intended career path to teach himself how to bake and ultimately opened Sidewalk Citizen Bakery which he runs with his partner, Michal Lavi. As with other modern artisan loaves, their chestnut-crusted sourdough is made using a naturally fermented starter – the same method all bakers used to coax their dough to rise before Fleischmann’s created the world’s first shelf-stable, fast-acting, commercially manufactured yeast in the late 1860s. The development streamlined the bread-baking process at home and enabled mass production.