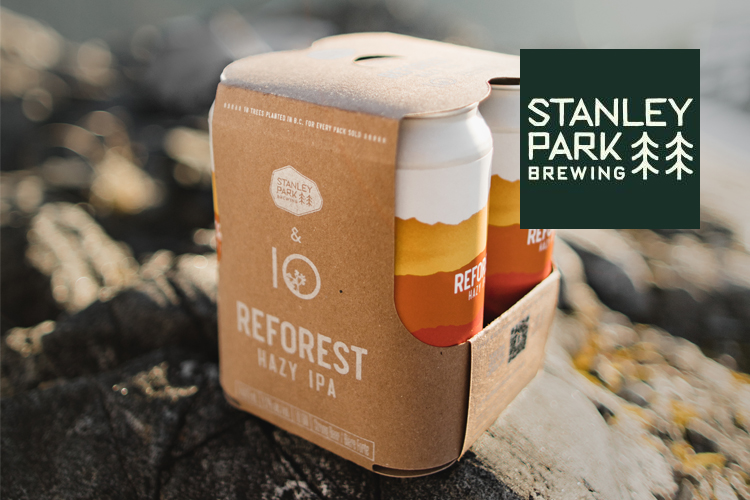 Much more than just a beer, Reforest Hazy IPA, is a wildfire reforestation project by Stanley Park Brewing and tentree.

Called to action by the smoky skylines that have plagued cities across Western Canada, Reforest Hazy IPA aims to regenerate forests burned by wildfires. For each 4 pack of Reforest sold, tentree and Stanley Park Brewing will plant 10 trees in Elephant Hill, BC.

Every beer has a QR code on the label that you can scan to track your trees. Once this code is registered, the customer is then able to track their trees and access information on Elephant Hill and the impact that they are making by supporting this project. To register your trees, please visit www.tentree.com/reforest.

“Ten trees may not seem like much, but it has the potential to change the environment and the communities around it. Ten trees can offset up to ten tonnes of carbon throughout the trees’ lives. That’s enough to offset the carbon emissions from two cars for an entire year,” explained Cooper Reis, tentree, Canadian Sales Manager.

To date, tentree has planted over thirty million trees. They’ve empowered a global movement that now spans more than twenty planting sites in more than ten countries around the world. Reis shared that they strive to become the most environmentally progressive brand on the planet by planting over 1 billion trees by 2030. A feat he says cannot be realized without the support of like-minded partners, such as Stanley Park Brewing.

“This project has been a true collaboration for us from day one,” said Kris Loshack of Stanley Park Brewing. “Over the last year we have been exploring new options to improve our environmental impact. This process included working with the team at tentree to create environmentally sustainable clothing for our new restaurant and brewpub. After hearing the team at tentree share how they are tree planters first and a clothing company second, we knew that we wanted to work with them to do more. The idea of a collaboration brew came up and both parties were immediately on board, recognizing the potential to make an impact and plant more trees.”

In particular, Brewmaster Thom Riley, Brewmaster of Stanley Park Brewing was excited by the unique opportunity this collaboration presented to give back. “It is not often that you get to brew a beer that makes such a direct and tangible impact on the environment. Giving our customers the opportunity to support a good cause while enjoying a great beer is a really satisfying feeling. This collaboration presented me the opportunity to brew one of my favourite beer styles and create a sessionable and flavourful Hazy IPA that I feel appeals to almost all beer drinkers.”

Reforest Hazy IPA is currently available for purchase at BC government liquor stores and independent retailers across BC, as well as select retailers in Alberta and Saskatchewan.

For more information on this project, please visit https://www.tentree.ca/pages/stanley-park.