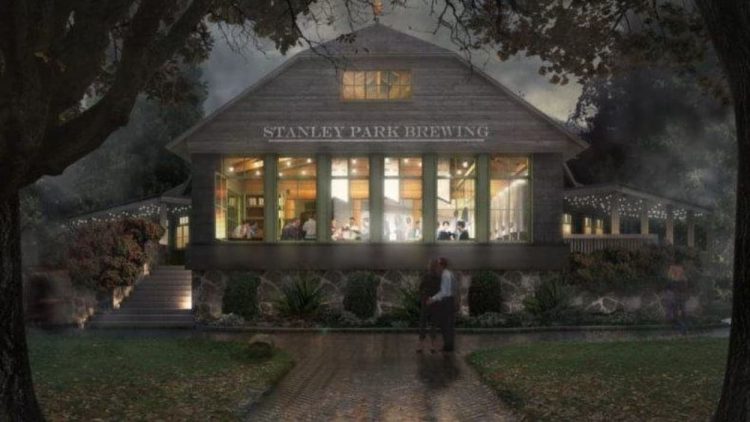 The Press Release below was released by a group called Stanley Park Advocates. We also present some related updates below.

JAN 15 Update: see also the article published by the Vancouver Parks Board,
http://vancouver.ca/news-calendar/new-restaurant-soon-to-open-in-historic-stanley-park-location.aspx

JAN 16: A motion for Stanley Park’s former Fish House restaurant to be converted to a brewpub by Stanley Park Brewing went to Vancouver city council yesterday. The motion passed with only one Councillor dissenting.

Not only will construction commence at the very sensitive start of the heron breeding season, but a large patio will be facing the colony from now on, with people spilling out late into the night under the herons’ nests. Novel and prolonged disturbance such as this may cause heron colony abandonment, and there are precious few large colonies like this left on our coast.

The Vancouver Park Board and City Council are about to set a precedent for allowing Anheuser Busch breweries, the promotion of drinking, and commercialization in parks throughout BC!

When queried about their choice of tenant for the old Fish House site, the Park Board cited “maximized profit and capital infrastructure investment.”

Park Commissioner Stuart Mackinnon voted against the proposal, and embodied the crucial stewardship role we elect the Park Board to play for us, when he said, “…I don’t believe our parks are meant for commercial manufacturing of products. There are lots of places within Vancouver to put [breweries].”

It is now up to the citizens who love Stanley Park to convince City Hall, the Vancouver Liquor Control Board, and Province of BC to protect Stanley Park from environmental repercussions, commercialization and corporate exploitation.

Only with your support is there a chance to keep our beloved Stanley Park the jewel that it is. Thank you. Stanley Park Advocates

– We had support from Carr, the only person willing to challenge what the Park Board recommended. Carr clearly grasped the fundamental issues: without proper public consultation, this is a precedent setting decision to commercialize and allow industrial manufacturing and retail sales of alcohol into all BC parks where all are prohibited. She also understood that the Park Board, abdicating their stewardship role, is violating their own Heronry buffer zone requirements by planting all of this next to the at-risk Heron Colony.

– Reimer wanted to vote for us, but it came down to the narrow parameters of the liquor primary license request and the information the Park Board, police or staff provided.

– It was clearly all about money. Councillor Stephens said as much. If Carr could have come up with a way to finance the Park Board without Anheuser-Busch’s influx, he would have voted with her.

– Everyone else just toed the line and chose to ignore the disturbing and contradictory facts SPA and others presented.

However, Council wanted to implement a rarely used, but special “Community Liaison Committee’ provision to monitor the activities of this development. We don’t know exactly what this means yet, but believe it may help.

Each of you have made a difference in your own way whether spreading the word, offering to help or raising challenging questions – THANK YOU. We share a few excerpts received from the broad base of people that comprise this group – from your next door neighbour, to fellow Vancouverites and citizens across the globe:
“The fact that PB, LLCB, Brewpub Boys, and city hall have been warned that citizens are knowledgeable, care, and are watching is a huge advantage for us going forward. And the fact that a community liaison will be set up is awesome as well.”
“Thank you all for a superb job. We shall no doubt meet again.”
“And thank you everyone on this fine team of crusaders. What everyone accomplished individually and collaboratively…. was extraordinary. Thank you too to everyone who spoke!”

“Thanks to each of you for your impressive contribution – everyone in their own way. Your unrelenting support has meant so much!
“Thank you to those that spoke out publicly, who wrote to media, and to everyone who supported the cause! We are grateful for all your efforts.”
Neighbours Unified for the Future

The windfall from this impressive grassroots and volunteer group is that we have connected and mobilized fantastic people with different talents, perspectives and interests across our special neighbourhood.

People hope we will stay active and connected as a community to address future issues. We will if there is interest and support. But first, let’s take a rest. 🙂

A Brief History of Stanley Park Brewing, Part I

A Brief History of Stanley Park Brewing, Part II – the Battle for the Fish House