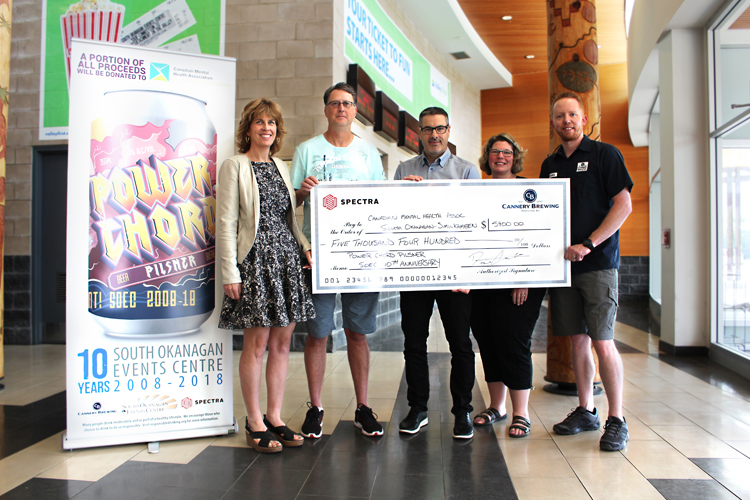 The SOEC’s Anniversary Beer made its debut at the Penticton Vees 2018-2019 season home opener on Saturday, September 29, 2018 and was sold at every major concert, hockey game and event hosted at the SOEC from September 29, 2018 to April 27, 2019. The Power Chord Pilsner was also available at Cannery Brewing as well as select cold beer and liquor stores in Penticton and Summerland as a limited release.

“We were thrilled to partner with the South Okanagan Events Centre team to create this special craft pilsner to commemorate the SOEC’s 10th anniversary. We enjoyed making this new beer, and we had great feedback from customers that enjoyed the Power Chord Pilsner. It’s very special knowing that this beer helped mark a major milestone in our community while partial proceeds from the sale of this beer helped support the great work of the Canadian Mental Health Association South Okanagan Similkameen branch (CMHA SOS) and the important work they do in our community,” explained Ross Thompson, head brewer and co-owner of Cannery Brewing.

Dean Clarke, SOEC General Manager and RVP Spectra Venue Management explained, “With support from the community, in partnership with sales at Cannery Brewery, we were able to raise $5,400.00 for the CMHA SOS branch. Focusing efforts to support organizations like CMHA, which provides a variety of local resources, tools, and training programs that promote mental wellness is something that is very important to us. We are thrilled that the community got behind this project and we are committed to finding new ways to continue our support.”

CMHA SOS Community Educator Liesel Reimer explained, “This year we were pleased to offer six free Community Talks within Penticton that were made possible through the generous funding of the SOEC’s 10 Year Anniversary Power Chord Pilsner.” In addition to the proceeds raised, Community Talks were supported by other mental health champions including Penticton Public Library, The Anomaly House of Art, Penticton Community Centre and Blenz Coffee. Reimer detailed, “In collaboration with The Anomaly House of Art, we were able to provide an evening of Art for Self-Care. At the Penticton Public Library, we had a good turnout for Building Mental Resilience at Work. We concluded our series at the Penticton Community Centre, where we welcomed Marcy Keehn to co-facilitate Supporting People Bereaved by Traumatic Loss.”