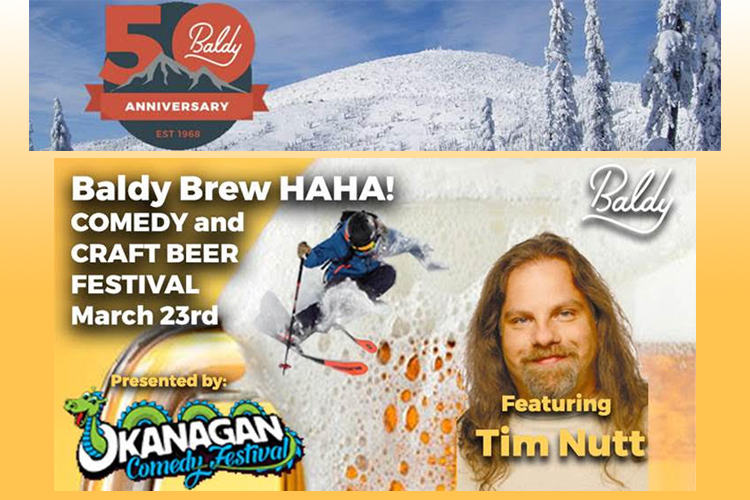 Skiing, Sun, Beer and Comedy on tap for big new event this Spring at Baldy

Mt. Baldy, BC (Monday, March 11th, 2019) – What better way is there to spend a Spring day than on the slopes of Baldy, skiing and riding in the sunshine, and then following things up with laughs and a few beers in the lodge? How about filling your après ski evening with 3 nationally famous comedians, and tasting some fresh brews from 6 BC Craft Breweries? That’s what we’ve got on tap for the inaugural Baldy Brew HAHA! Craft Beer and Comedy Festival taking over the Baldy Mountain lodge on Saturday March 23rd.

The Baldy Brew HAHA! Is shaping up to be the premiere event of the season, or at least the most delicious and most hilarious event of the season! There will be a minimum of 6 BC Craft Breweries setting up tasting stations in and around the lodge with 12 different beers and ciders for guests to taste. At the end of the night guests will select their top three favourite brews and we’ll hand out our beautiful hand-made medals for the Baldy Brew HAHA! People’s Choice favourite beers.

The Baldy Brew HAHA!, is presented by the Okanagan Comedy Festival and in between tasting delicious beers we’ll be bringing you 3 incredibly hilarious comedians. Headlining the event will be internationally known Tim Nutt of Just for Laughs, CBC’s The Debaters and Comedy Now fame.

Tim Nutt is a comic who can’t be judged by his cover. Long-haired, bearded and “rough around the edges,” audiences expect Nutt’s material to match. But he surprises with razored-down punch lunes and well conjured-up premises that place him as one of the top comics working today.

Opening up for Tim will be Alex Fortin and Ryan Short, veterans of the Comedy World Series.

Check out the Comedians

This event is setting up to be the event of the season at Baldy. Tickets are now on sale. We have a limited number of tickets available for this event and expect it to sell out quickly. Get your tickets now and tell your friends to make sure you don’t miss the event your friends will be talking about for days.

“This event is all part of Baldy’s increased effort to put on top quality, awesome events for our guests as we continue to take our game to the next level as the place to be all winter,”

Tickets can be purchased online for $49.99 at https://baldyresort.com/event/ brewhaha/

Baldy Mt skiing offers an experience like no other. With 25 feet or more of powder per year, endless perfect glades, excellent grooming and a wide variety of terrain to choose from. Regarded as the best family-friendly resort in the Okanagan, Baldy Mountain Resort offers affordable season passes and lift tickets, 80% beginner and intermediate runs, terrain park,  world-class grooming, knowledgeable ski and snowboard pros, an unmatched, unique personal care and service level and many extracurricular activities for kids, making it the perfect setting for families, friends and the young at heart.