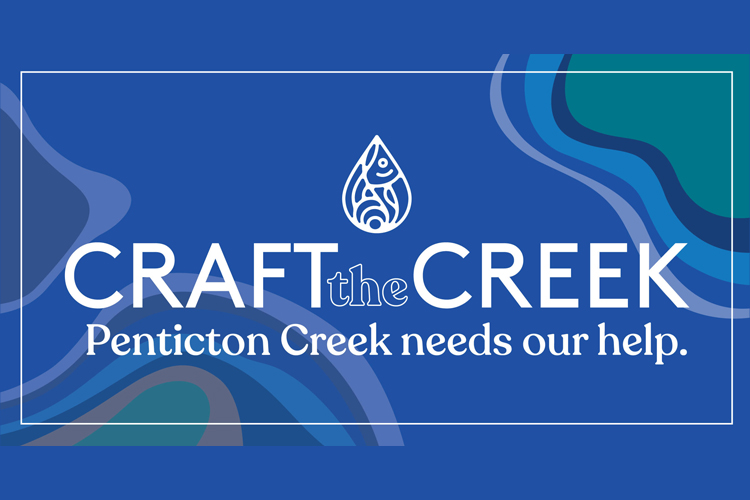 Sippin’ for the Salmon Newcomer to Penticton’s vibrant craft brewing scene, Slackwater Brewing, in collaboration with the City of Penticton will be hosting an event this Thursday evening to raise awareness event about the need to re store the Penticton Creek.

“This is something that means a lot to us, having built a brand based around sustainably enjoying our waters and ecosystems. We approached the city back in the spring before we had opened to put our hands up and see where we could lend a hand in increasing awareness and fundraising for the Penticton Creek Restoration Project.” Liam Peyton, General Manager.

The Penticton Creek Restoration commenced construction in August of 2015, replacing the deteriorating concrete creek bed which was built in the 1950s for flood control. Since then, the habitats for spawning kokanee and other species have had a considerable decrease in spawning numbers. The City’s master plan is not only to attempt to rebuild and enhance the habitat – to encourage species to return in healthy numbers each year but to beautify the creek and its surroundings to bring it back closer to its former glory. The balance of flood mitigation and fish habitat is the tricky part…

“With a total cost of about $30 million, the restoration of the creek is an extremely expensive but important undertaking. The speed at which we can complete the work depends on our ability to get funding,” says Mayor John Vassilaki. “We are looking for grants and are considering fundraising options. It really means a lot that a private organization is willing to step up and support this important initiative.” City of Penticton.

Thursday’s event, ‘Craft the Creek’ will be an informal awareness session, letting people and businesses know about the need to restore the creek and the City’s plan . Slackwater Brewing kicking things off by donating 25 cents per sleeve of their Angler’s Tale NW Pale Ale sold in the brewery to the project, in the hope that there will be many fishing stories to tell in the future on the creek.

Craft the Creek is this Thursday, October 10, 7pm until 9pm at Slackwater Brewing, 218 Martin St, Penticton.

For more information on the event, contact [email protected]