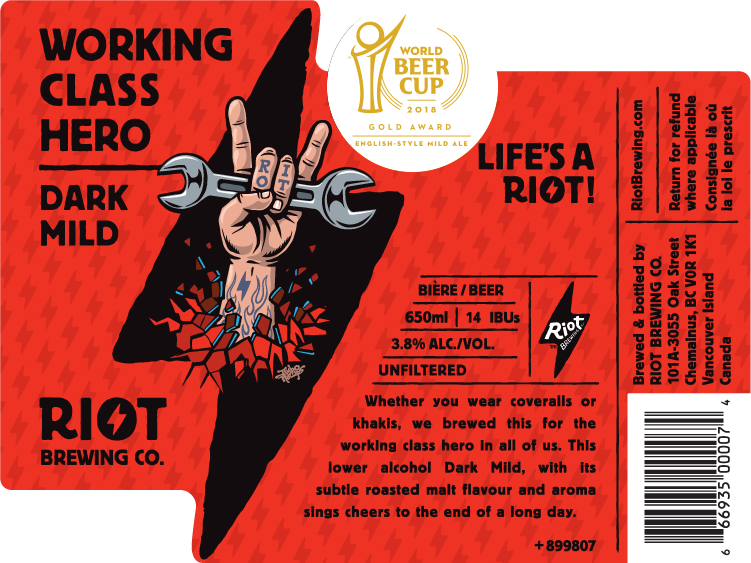 Chemainus, BC •  Riot Brewing Co. claimed a gold and a bronze award in the 2018 World Beer Cup, a global beer competition that evaluates beers from around the world and recognizes the most outstanding brewers and their beers.

Awards were given in 101 beer-style categories during the World Beer Cup award ceremony on May 3, 2018 at Music City Center in Nashville, Tenn.

Riot Brewing Co. also received a bronze award in the Coffee Beer style category for its Breakfast of Champions Coffee Lager, a crisp and clean lager that has been infused with coffee from Colombia produced by Drumroaster Coffee.

“We’re absolutely stoked – speaking politely – to win gold for our Working Class Hero Dark Mild, and bronze for our Breakfast of Champions Coffee Lager, the result of some serious hard work from our incredible team,” said Aly Tomlin, owner of Riot Brewing Co. in Chemainus, BC. “BC’s beer scene is growing and we’re proud to be part of the success of our industry, especially on an international scale.”

World Beer Cup winners were selected by an international panel of 295 beer judges from 33 countries, 72 percent of whom were from outside the United States. Widely regarded as the “Olympics of Beer,” the World Beer Cup saw an impressive field of 8,234 entries from 2,515 breweries in 66 countries—the largest competition to date.

Presented by the Brewers Association, the World Beer Cup has been held biennially since 1996, to celebrate the art and science of brewing by recognizing outstanding achievement. For additional information, visit the World Beer Cup website.

Riot Brewing Co. was conceived in 2009 when Aly Tomlin and Ralf Rosenke hatched the crazy idea of opening a brewery. The two of them incorporated in 2013, and continued the quest to launch Riot Brewing Co. It was in 2015 when Morgan Moreira joined the family, that the brewery moved closer to becoming a reality. Riot Brewing Co. finally opened in November 2016 after an epic and rewarding journey. Head brewer Fabian Specht, formerly of Central City Brewers & Distillers and Howe Sound Brewing, joined the team in early 2016 and embraced Riot’s commitment to sessionable true-to-style beers. The Riot Squad can be found on Vancouver Island in the beautiful seaside town of Chemainus BC. Riot Brewing Co. beers can be found on Vancouver Island, the Lower Mainland and through out BC, for now.