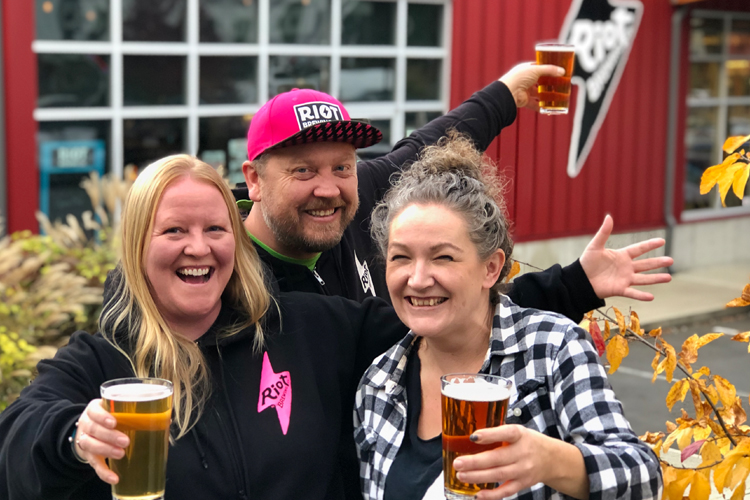 RIOT MAKES COMEBACK THANKS TO CUSTOMER-TURNED-ANNONYMOUS-INVESTOR

If you’re a local craft-beer enthusiast, you’ll undoubtedly be familiar with Riot Brewing Co. and their multi-award winning selection of beverages. The Chemainus based Brewery experienced meteoric success in their first couple years, earning them a myriad of prestigious accolades including Bronze and Gold Medals at the 2018 World Beer Cup Awards in Nashville, TN.

In recent months, however, Riot has been the subject of much speculation after stock began running out and operations all but screeched to a halt. It would seem that instant success had not come without its drawbacks. Owners claim lack of preparation for managing rapid growth, coupled with significant product losses following last winter’s power outages, led to serious cash flow problems.

“We struggled personally, financially and emotionally; we had no plan for dealing with these hurdles” says Co-owner Alyson Tomlin. “But we stayed positive, sought out expert help and started clawing our way back.”

To facilitate the initial launch of the Brewery, Tomlin, along with business partner Ralf Rosenke attracted start-up investors through good-old-fashioned conversation. Following this same recipe, the duo has once again achieved success by converting a loyal customer into vital new investor – and just in the nick of time.

“I had never dreamed of investing in a brewery” confesses the investor, who has requested to remain anonymous. “When stopping in for a quick beer one day, I started chatting with Aly (Tomlin) and I learned about the financial difficulties they were experiencing. I was really impressed with not only the product they put out, but all their achievements. After only a few days of watching the workings of the brewery, the comradeship of the team and the relationship they have with the community, I decided to call my investment partner and the rest is history!”

Riot Brewing Co. is back into the swing of a full scale production. As products once again start hitting the shelves in local beer and wine stores, the Brewery’s tenacious and unconventional entrepreneurs say they couldn’t be more grateful for the unwavering and overwhelming community support. “Cheers to everyone who is helping us get back on our feet after that gnarly wipeout!”

Riot Brewing Co. is a microbrewery is located in the seaside village of Chemainus on Vancouver Island, BC. Their custom-built brewery, complete with 3,200 square foot production facility and 1,200 square foot licensed lounge and patio, opened in November 2016. The Brewery specializes in true-to-style, flavourful and approachable craft beers, which have earned local, national and international recognition, including Silver at the 2018 Canadian Brewing Awards in Halifax, NS as well as Bronze and Gold at the 2018 World Beer Cup Awards in Nashville, TN.