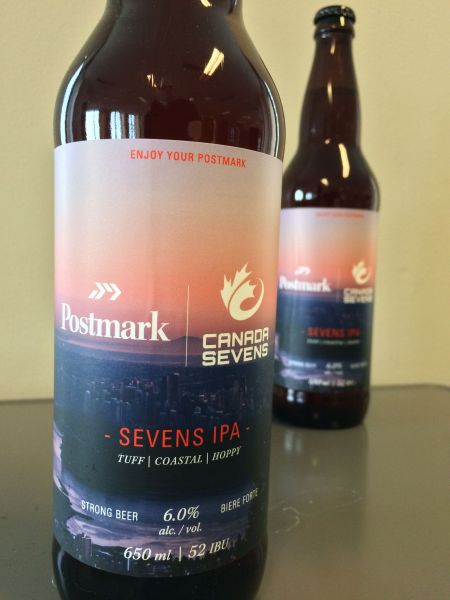 VANCOUVER, BC (February 23, 2016) – The Canada Sevens organizing committee for the HSBC World Rugby Sevens Series welcomed Postmark Brewing today as a licensee and official beer partner. The award-winning Vancouver brand joins Canada Sevens in a unique collaboration that will include the limited-edition Sevens IPA. The beer will be available in BC throughout the months of March and April, to coincide with the men’s tournament in Vancouver March 12-13 at BC Place Stadium, and exclusively at the women’s tournament in Langford April 16-17, at Westhills Stadium.

The announcement comes just days after the Canada Sevens Organizing Committee confirmed that tournament tickets are 95% sold, and a full sell-out is anticipated in the coming days. Numbers to date also point to the HSBC Canada Seven’s Men’s tournament setting records next month as the largest ever rugby crowd in Canadian history.

“Partners to the HSBC Canada Sevens are playing a huge role in building the tournament, and the sellout would not be possible if it weren’t for them.” says Bill Cooper, CEO of HSBC Canada Sevens. “We have been strongly focused on player and fan experience, and this sell out will help us to deliver on a world-class atmosphere for everyone involved.”

“Thanks to Postmark Brewing, the HSBC Canada Sevens Series in Vancouver will have the unique honour of being the only stop throughout the 10 city global tournament tour to offer and serve their own beer to fans,” Cooper said in a statement.

The hoppy West Coast IPA, which clocks in with a sessionable six per cent alcohol content, will be available at both BC Place and at Westhills Stadium in Langford for the Women’s Seven Series (April 16-17).  Sevens IPA will also be available on draft in more than 30 select bars and pubs throughout the Lower Mainland.

With files from The Vancouver Sun.