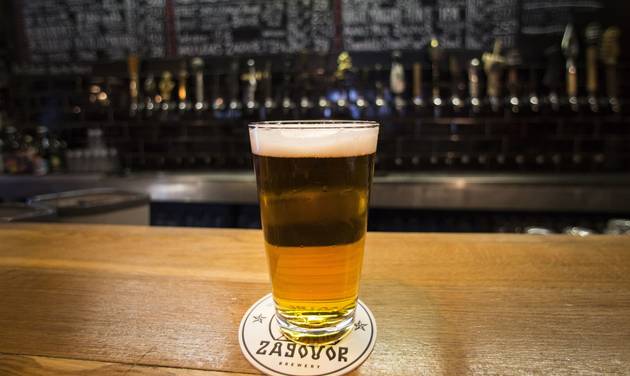 Above Image: In this July 21, 2017 photo, a glass of craft beer sits on the bar at the Rule Taproom pub in Moscow, Russia. Pint by frothy pint, a hoppy revolution is brewing in Russia. A new generation of craft beer brewers began sprouting in the vodka capital of the world as foreign beers got too expensive and beer-drinkers started looking for alternatives to mass-produced lagers. (AP Photo/Alexander Zemlianichenko)

MOSCOW (AP) — Pint by frothy pint, a hoppy revolution is brewing in Russia.

This new generation of craft brewers began sprouting in the vodka capital of the world as foreign beers became too expensive and beer fans sought alternatives to mass-produced lagers. From juicy IPAs to velvety stouts and lip-smacking sours, beers served at breweries that opened in recent years in cities like Moscow and St. Petersburg offer visitors and locals alike the styles popularized in the last two decades by the craft beer boom in the U.S. and Europe.

Many breweries started after the currency collapse of 2014, when imported beer prices skyrocketed and supply fell.

“There was almost nothing being brought from outside,” said Alex Korobkov, co-owner of the Zagovor brewery and the RULE Taproom in central Moscow. “So people decided to brew something they had tried outside of Russia.”