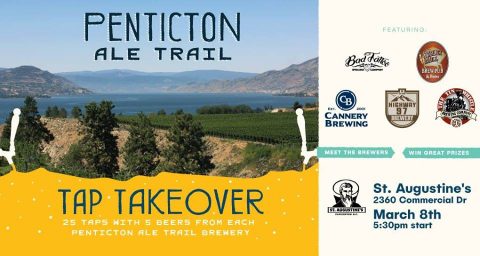 The five Penticton craft breweries include Bad Tattoo Brewing, the Barley Mill Brew Pub, Cannery Brewing, Highway 97 Brewery and Tin Whistle Brewing. Levy explained, “Each brewery will be featuring five beers during the tap takeover, for a total of 25 craft beers from Penticton on tap for this one night only.”

The tap takeover begins at 5:30pm at St. Augustine’s at 2360 Commercial Drive in Vancouver. A number of the team members from each of the Penticton craft breweries will be attending, so you can meet the teams and ask questions.

Levy continued, “There will also be prizes throughout the night including beer swag from the breweries and a fantastic grand prize. With every flight or glass purchased at the #PentictonAleTrail Tap Takeover, guests will receive an entry form to win the grand prize of a Penticton getaway! The grand prize includes a 2-night stay at the Ramada Penticton from April 13-15, 2018 for 2 adults, 2 weekend passes for the 2018 Okanagan Fest of Ale, plus a personal tour and a $50 gift certificate for each of the 5 Penticton breweries.” Now that is a grand prize!

For additional information on St. Augustine’s, visit www.staugustinesvancouver.com
For more information about the BC Ale Trail, visit https://bcaletrail.ca/ and http://pentictonaletrail.ca
For more about Penticton, visit www.visitpenticton.com

About the BC Ale Trail:

In partnership with Destination British Columbia and the BC Craft Brewers Guild, the BC Ale Trail emphasizes how a visit to or around British Columbia is enhanced with a pint of craft beer culture. With an increasing preference for local craft beer in BC and growth of artisanal beer in North America, the BC Ale trail embraces the “buy local” movement, helps showcase independent breweries, and connects visitors with the unique culture at the heart of communities all over the province. The Penticton Ale Trail is one of the many ale trails featured around the province.