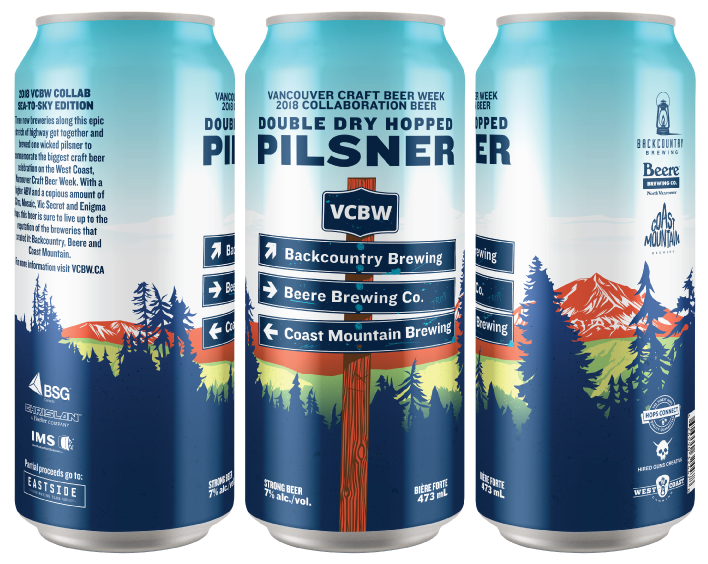 Vancouver B.C.—Vancouver Craft Beer Week 2018 (VCBW) is Western Canada’s biggest celebration of craft beer culture, and returns for its ninth straight year, from May 25 to June 3. To commemorate the annual citywide celebration of craft beer, VCBW has partnered with Backcountry Brewing (Squamish), Beere Brewing (North Vancouver) and Coast Mountain Brewing (Whistler) to create the official 2018 VCBW Collaboration Beer: Sea-to-Sky edition. These three breweries, each located along the scenic Sea-to-Sky Highway, came together to brew an exceptional pilsner to showcase the quality of beer being produced in the area. With a robust 7% ABV and a copious amount of Citra, Mosaic, Vic Secret and Enigma hops, the 2018 VCBW Sea-To-Sky Collaboration Double Dry Hopped Pilsner is sure to live up to the reputation of the breweries that created it.

The 2018 VCBW Collaboration Beer is hitting shelves today, just in time for Vancouver Craft Beer Week 2018’s kickoff on Friday, May 25. The Double Dry Hopped Pilsner is available in four-packs of 473mL cans at select private liquor and beer stores, and on draught at the three collaborating breweries’ and a few chosen bars and restaurants. It will also be served in cans at the VCBW Kickoff: East Van Crusher on May 25 and on tap at the VCBW Festival at the PNE Fairgrounds on June 2 and 3. Partial proceeds of all 2018 VCBW Collaboration Beer sales will be donated to Eastside Boxing Club’s Self Defence Series for female-identified, and members of the LGBTQ+ community.

“Our annual collaboration beer represents what Vancouver Craft Beer Week is all about: community,” says Leah Heneghan, VCBW Festival Director and Co-founder. “This year, about 30 breweries from across the province joined us at Backcountry Brewing for our ninth annual brew day in support of the three collaborating breweries, Vancouver Craft Beer Week and this year’s charitable partner: Eastside Boxing Club.”

The official 2018 VCBW Collaboration Beer would not be possible without the support of the following community-minded companies and organizations: