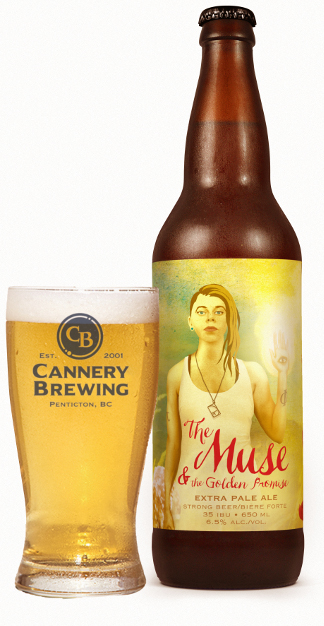 Penticton, BC. Cannery Brewing’s latest beer, The Muse & The Golden Promise, will envelope your heart and soul and draw you in enticing you to savour another sip.

Jeff Canada, lead brewer for this Artisan Creation beer explained, “The Muse & The Golden Promise is a blend of Golden Promise malt, California ale yeast, and Simcoe hops. This Extra Pale Ale is our most recent Artisan Creation release. With 35 IBU’s and 6.5% alc./vol., it has the drinkability to enjoy with friends, paired alongside a meal or while on the patio soaking up some sunshine. In the future, this beer will roll into our regular line-up and will be available on an ongoing basis.”

All of the beers in Cannery Brewing’s Artisan Creations series feature labels that are artistically designed to match the artistry of the beer. Canada explained, “The very talented Okanagan-based artist and designer Myron Campbell illustrated and designed this label with us as a reflection of the strength and beauty of the women in our lives.”

Read all about the beer here:
https://www.cannerybrewing.com/beer/muse

Here are some other labels Myron has illustrated for Cannery. Awesome!

New beer for @CanneryBrewing that I was able to design/name, Darkling – Oatmeal Stout. In stores very soon! pic.twitter.com/qenrMv9C6D

Really got into digital painting in #Photoshop with this one. Detail of the Knucklehead cc @CanneryBrewing @FRENDEN pic.twitter.com/66oP7PB7Fu