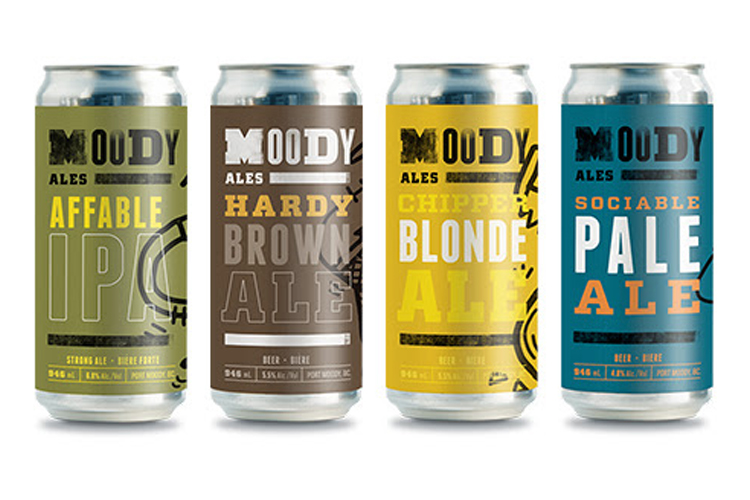 West Coast Canning and Moody Ales have teamed up for West Coast Canning’s first ever collaboration brew, or brews in this case. We are releasing mixed 4 packs of 473ml cans of two beers that celebrate the crazy awkward hard to predict weather we get on the west coast during the transition from winter to spring. Mixed Forecast brings us Still Raining Dark Lager, inspired by the classic german schwartzbier, as well as Shorts Weather ISA (India Session Ale) – a session strength beer. Both beers are enjoyed equally well on a sunny patio, a rainy patio or inside despite any kind of weather.

Still Raining Dark Lager is a 5.5% lager with roasted malts giving it rich aromas of chocolate and coffee, but don’t let those fool you… this dark lager is smooth, crisp, and extremely crushable. With these in hand you will forget that it’s still raining.

Shorts Weather ISA is a 4.8% easy drinking India Session Ale boasting a citrus and grapefruit punch. A hoppy beer rounded out with a sweet backbone that brings it all together. Shake off your rain jacket and slip into some swim shorts with this perfectly balanced session ale.

When asked what inspired this collaboration, Moody Ales co-founder Adam Crandall said “we always love making beer with people we like hanging out with. The folks at West Coast Canning are great and definitely a team we like to sit and have a few beers with. We pitched the idea to Matt at West Coast Canning and he didn’t hesitate at all.” “After some discussion, the brewers and canners came up with the idea to brew some beers that would work equally well on a patio, especially on those west coast springtime days where sun turns into rain and back to sun” said Matt Leslie, co-founder at West Coast canning. “We see it all the time at Moody Ales” said co-founder Dan Helmer, “it’s a beautiful day and our patio is packed, it starts raining and no one moves, they just put their jackets on and keep drinking – only on the west coast!”.

This is a unique collaboration in an industry where collaborations usually entail two breweries teaming up on a beer recipe, but it makes sense. West Coast Canning brought their packaging insights and package design skills to make sure the cans look fantastic, while Moody Ales brought their expertise in brewing to make sure the beers taste great. West Coast Canning plans for this to be the first of many collaborations with breweries in BC and Alberta, each one benefiting a charity of the brewery’s choice. Moody Ales and West Coast Canning will both be donating partial proceeds from Mixed Forecast to a youth related charity in the Tri-Cities area.

On Monday March 19th the West Coast Canning team will be doing something they’ve never done before, packaging beers that they helped brew. To celebrate, they will be bringing two of their mobile canning lines to Moody Ales and running them simultaneously, putting both beers into the mixed packs all at once. “We’ve never done something like this before and we are super excited, it’s going to be fun!” said Matt Leslie.

Cans and kegs will be shipping the week of March 26th and there will be a launch party with both beers and the folks from West Coast Canning and Moody Ales on Friday March 30th from 5pm to close! Come hang out, rain or shine!

In addition to the Moody Ales tasting lounge and their sunny patio, the Mixed Forecast is available in 4 packs of 473mL tall cans at private liquor stores located throughout the province. Hit up some of your favourite patios, including both Darby’s locations in Vancouver, to find these beers on tap.

Moody Ales is a Craft Brewery located on Brewers Row in beautiful Port Moody, British Columbia. Founded in October 2014 by Adam Crandall and Dan Helmer, Moody Ales has experienced rapid growth to date. The Moody Ales tasting room offers a large, welcoming lounge and outdoor patio where beer lovers can have a flight or a pint and learn more about craft beer from the knowledgeable staff. Moody Ales’ core beers include the Chipper Blonde Ale, Hardy Brown Ale, Affable IPA, Sociable Pale Ale and Vienna Lager. Growlers, 946 mL Crowlers®, 650 mL bottles and six packs of cans are all available for take away. The Moody Ales brewery, lounge and patio are located at 2601 Murray Street in Port Moody, BC.

West Coast Canning is proud to be Canada’s first mobile canning company that provides craft breweries (cideries and wineries) in BC and Alberta with a full service packaging solution so they can focus on making great beer.

We bring our customized canning line, labour, supplies and expertise to new and established breweries and provide a cost effective and convenient pay-as-you go service to can even short-run orders. If you want to use some or all of your supplies and have us just can your product that’s okay too!

Our mission is to have fun with our customers, to be seen as a part of their team, and to be the cleanest and most reliable Canadian mobile canning service that expands our customers’ market opportunities to reach new consumers and markets.

Samples available by request; please send a note to Adam with drop off location.