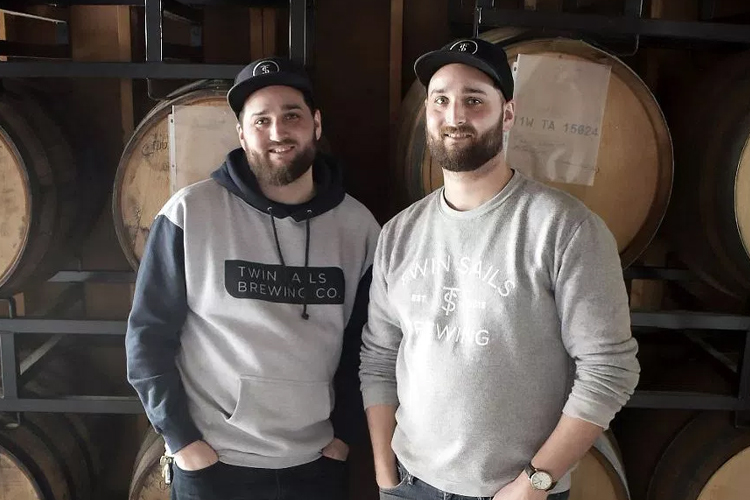 A fair bit has changed in the local craft beer scene since I last wrote about Port Moody’s Twin Sails Brewing. New operations have come on line, stylistic trends have caught on and become pretty entrenched (think New England IPAs and ‘craft lagers’), transient brewers like Superflux and Boombox have become part of the local fabric, and large-scale contract brewing has helped smaller outfits expand production and brought a few stand-alone brands to market.

But despite all these changes, one thing has definitely remained the same: Twin Sails is still totally killing it. As I mentioned in my review of that first batch of Slam Dank, by releasing an endless spate of rotating small-batch beers, the Port Moody-based brewery has really nailed the art of maintaining the hype that surrounded their first forays into contemporary American ales, holding our collective attention, and keeping our eyes glued to their social media channels. That’s not a mean feat for a couple down-to-earth guys relatively new to this whole brewing game. And as the constant line-ups outside their Brewer’s Row tasting room on any given Saturday afternoon will tell you, the popularity of Cody and Clay Allmin’s little brewery goes well beyond the assorted chin beards and limited-release traders who go out of their way to buy up the latest batches of Str8 Flexin’ and Short Pants (although Twin Sails’ ability to keep those notoriously fickle consumers satisfied hasn’t gone unnoticed). No, as their clean sweep of the Imperial IPA category at this year’s BC Beer Awards illustrates, in the short 18 months since they came onto the scene, Twin Sails has really catapulted itself to a pretty central position in BC’s craft beer industry. And while I couldn’t really say a bad word about any of their ridiculously on-point IPAs, High Socks – their insanely balanced North East Mosaic IPA (last released about a month ago) – has to be one of my favourite IPAs being produced anywhere. I always manage to grab a few extra four packs for the cellar whenever it gets released (and you’d be well advised to do the same the next time you see it around).