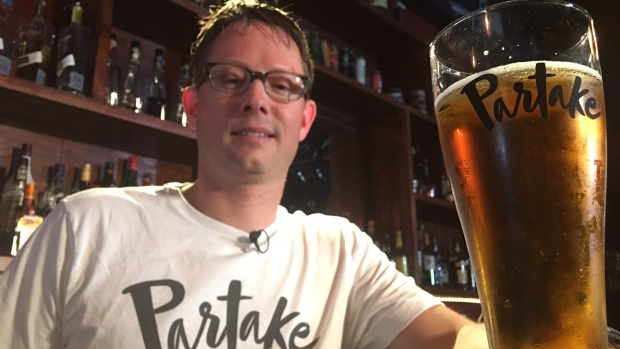 Above Image: Engineer-turned-entrepreneur Ted Fleming pours us a glass of new non-alcoholic beer that he promises really does taste like beer. (Aizick Grimman/ CBC Toronto)

For a craft beer connoisseur, it was the worst kind of news.

Ted Fleming went in for what was supposed to be a regular visit to the doctor’s office. Instead he was diagnosed with Crohn’s disease, a sometimes painful bowel condition the impacts the body’s ability to digest food.

Fleming had to be hospitalized and eventually made a number of lifestyle changes, including one very tough, but for him necessary, change: his beloved beer had to go.

“I really missed my beer. I missed the taste,” he admitted.

He tried the non-alcoholic stuff, made by the big beer companies, and quickly concluded it wouldn’t do.

So he set out to make his own brew and by this September, he hopes it’ll be on grocery store shelves across the province.

“It’s kind of crazy, I certainly wouldn’t have seen this would be my path,” said Fleming, now 40, who previously worked as an engineer.

“It’s funny such a negative thing like a diagnosis of Crohn’s disease would lead to something so positive. It’s hard not to look at that in a special light.”