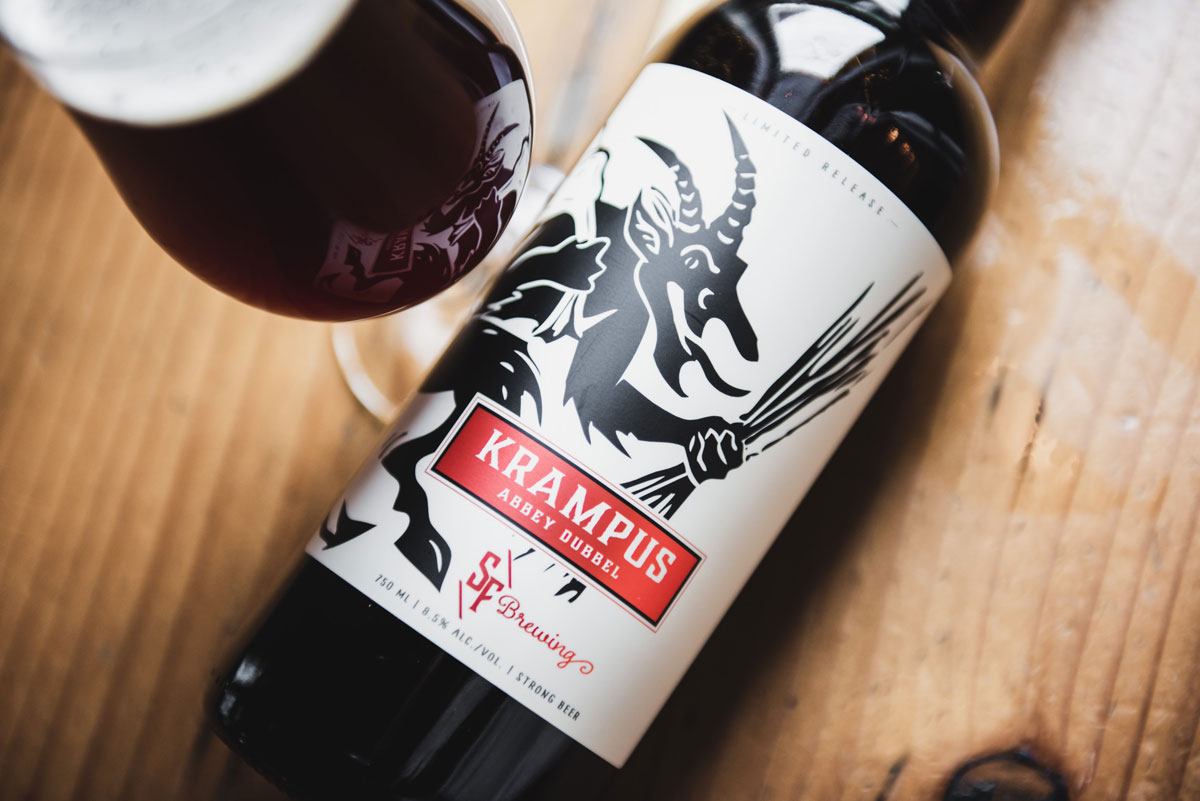 VANCOUVER B.C. – KRAMPUS has arrived just in time to take the edge off the sudden onset of wintry weather! Just as malty, spicy and warming as ever, this Abbey Dubbel brings some warmth and cheer to the darkest and coldest time of the year!

A bundle was squirming, slung over his back,
and he looked like a thief, sneaking off with his sack.

His eyes were like embers, glowing fierce in the night
– I froze in the shadows to hide from his sight!

A bundle of branches held tight in his fist,
reminded me that this was no happy tryst.

He had cloven hooves and a serpentine tail,

my shameful behavior he was here to wassail.

He was wickedly bad, an evil old devil.
I cringed when I saw him, his whole being so dreadful.

The glint in his eye and the nod of his head
soon gave me to know I had plenty to dread.

BREWER’S NOTES
Krampus is a Belgian style Abbey Double brewed with Belgian candy sugar and dark malts. Rich with the flavour of dried stone fruits, subtle toffy and spice, this deceptively alcoholic beer has a long and warming effect on the constitution – just the thing to bring some warmth and cheer to the darkest time of the year!

KRAMPUS himself will be presiding over the brewery December 9th-11th for the annual party in his honour – KRAMPUSMARKT! The entire weekend of festivities will include an old-world inspired winter market featuring 30+ artisan vendors, live music, and a chance for everyone’s favourite PHOTOS with KRAMPUS, all enjoyed with a glass of cheer in hand! Mark your calendar – more details coming soon!

Strange Fellows is an East Vancouver craft brewery inspired by tradition and creativity that celebrates the strange and the extraordinary. We gratefully acknowledge that we work and play on the unceded lands of the Tsleil-Waututh, Squamish and Musqueam nations.