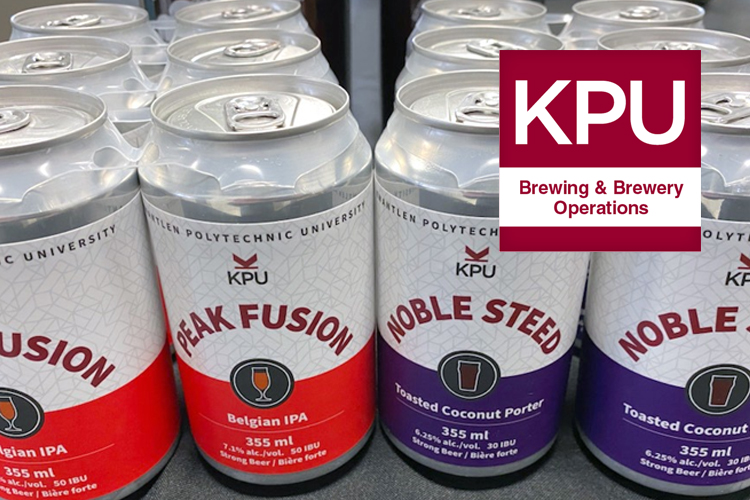 CORRECTION: due to a technical issue, the beers will now be available to the public starting on April 23, 2021.

Langley, B.C. — Every year at Kwantlen Polytechnic University, second-year brewing students release signature recipe beers as a capstone project in their final semester. For 2021, four teams will be releasing their beers in cans and growler fills from the KPU Brew Lab.

“The capstone project is an opportunity for our second-year brewing diploma students to shine and use everything they’ve learned about making beer over the last two years to showcase their skills and talent in their signature-recipe beer,” says Alek Egi, chair of the KPU brewing and brewery operations program.

“They create and brew it all on their own and are graded on the quality and taste of their beer, as well as how they market and sell their product.”

“We were inspired to make Peak Fusion because all three of us like IPAs but were also interested in doing a Belgian wheat beer with unique yeast flavour characteristics,” says Michael Miller.

The Noble Steed Toasted Coconut Porter takes caramel and chocolate flavours and enhances them with a little nuttiness from toasted coconut.

“The Coconut Porter from Swans is what started my love of craft beer many years ago and I was always chasing that memory. So, I decided if I wanted that same beer again, I should make it myself! Having brewing partners who also liked dark beer was a match made in heaven!” says Alex Paul.

Mango Lore blends a smooth wheat body with mango puree for a fruity burst that’s sure to make it feel like summer.

“The three of us love anything to do with mango and releasing a fruit beer at the cusp of summer seemed like perfect timing. The idea of using real mango pulp and not extract drove us towards making this fruit-infused beer,” says Nishant Amin.

“Fruit wheat beers are a relatively overlooked beer market segment, yet the popularity of pre-packaged radlers soars during the summer months. I love the taste and appearance of wheat beer, and it’s the perfect vehicle to carry fruit flavours,” says Darach McDonnell.

A combination of hops gives the dry, sparkling and refreshing Quench Wave Brut IPA aromas of citrus and guava with a spicy kick of ginger.

“We wanted to do something special for our signature beer and I remembered a trip to San Francisco a few years ago, where the Brut IPA was born and was exploding in the market. It’s a fairly new style and brewing this beer requires some understanding of how enzymes work and how to achieve very low gravities. Combining those factors with a hop-forward beer with some spice sounded interesting and fun to us, and great for the spring/summer season,” says Miguel Molina.

The signature series will be available in six-packs and growler fills on Friday, April 23 from 1-6 p.m. at the KPU Brew Lab at 20901 Langley Bypass, Langley, B.C.

For the health and safety of customers and staff, COVID protocols are in place for beer sales and we kindly ask customers to wear a face mask and follow the instructions on-site. Out of an abundance of caution at this time, the lab isn’t offering tasting samples prior to purchase.

For more information on the brewing and brewery operations diploma, visit kpu.ca/brew.