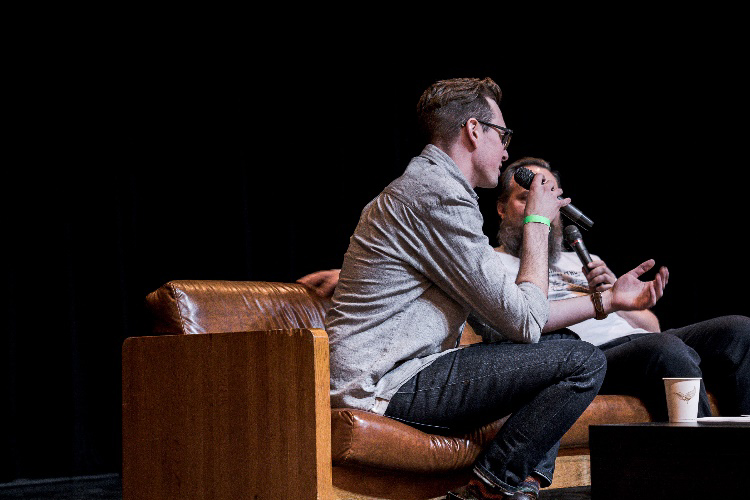 VANCOUVER, B.C. – Hopwired Festival, Canada’s Festival of Artisan Coffee and Collaboration, is excited to announce it’s tasting panel lineup today that includes some of the artisanal beer world’s purveyors and influencers. The yearly collection of panel topics is hosted by Aaron of Cascadian Beer Podcast, who has interviewed everyone from Sam Calagione (Dogfish Head Brewery), Bart Watson (Chief Economist of the Brewers Association), Garrett Oliver (Brooklyn Brewery), and Charlie Papazian (founder of the Brewers Association). This year Aaron opens up the event interviewing two remarkable breweries on both spectrums of success.

History on Tap will be the first panel to start the day – and will surely be historical – as Mari Kemper of Bellingham’s Chuckanut Brewery and Jean-Francois Gravel of Montreal’s Brasserie Dieu Du Ciel will open the day to chat with Aaron about the founding of both of their breweries. Chuckanut Brewery is one of the world’s most awarded german-style breweries and in 2019 was named the Large Brewery of the Year in Washington State. Brasserie Dieu Ciel is one of Canada’s most awarded breweries in eastern Canada and is renowned for their stouts and being the grandfather of today’s american imperial stout style.

A tasting of wood-aged beer, coffee and food pairings follows History on Tap with the Foeder for Thought panel. This panel feature’s North Vancouver’s House of Funk Brewing and Edmonton’s Blind Enthusiasm Brewing who will broadly speak about their beautifully aged beers and their focus on food savvy beers, like House of Funk’s culinary inspired saison series. House of Funk deservingly won The Growler’s 2019 BC Brewery of the Year. Blind Enthusiasm Brewing won Brewery of the Year in 2018 at Alberta’s Craft Beer Awards, along with being featured in multiple 2018 and 2019 “best restaurant” lists for it’s Edmonton- based Bierra restaurant.

Message in a Bottle is a collection of passionate leaders from one of North America’s leading micro-grain maltsters to one of Canada’s leading Ontario-based craft breweries. Mecca Grade Estate Malt is a Madras, Oregon based malter that is growing some of most sought-after artisanal grains with it’s malts found in beers from Vancouver’s Temporal Artisan Ale to Washington’s Dwinell Country Ales – and Oregon’s Wolves & People. Nickel Brook Brewing is one of Canada’s leading players in the Ontario craft beer movement, since 2005, and boasts a massive barreling program that features over 400 whiskey, wine, gin, and tequila barrels – along with it’s gold medal winning selection of Cause and Effect Blonde Ale, Naughty Neighbour American Pale Ale and Kentucky Bastard Imperial Stout.

Funk Yeah! Is the fourth and final tasting panel. This panel is a tasting of wild beer that features a leading Washington based wild ale brewery and a leading Kelowna based wild ale brewery. Hopwired boasts a selection of coffee beers that feature ingredients like blackberries and bourbon-based stouts – these two panelists close out the event to speak about their beers and what to expect in the forth coming year with wild ales. Dwinell Country Ales is a family-owned brewery, based in Goldendale Washington, that is dedicated to making farmhouse and wild ales simple – the brewery has been named on a number of lists in Washington as one of Washington’s best farmhouse best breweries and also as one of the most underrated. Wild Ambition Brewing is a family-owned brewery, based in Kelowna, that is putting out some of the West Coast’s most sessionable and refreshing belgian-style and French-style beers.