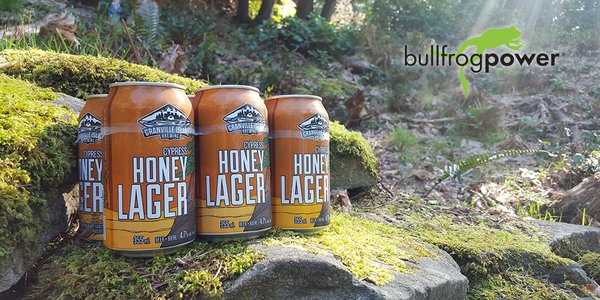 Fans of the West Coast craft beer and nature-loving lifestyle take note: earlier this month, Granville Island Brewing announced an initiative that ostensibly makes them the first brewery in British Columbia to choose 100 percent green electricity and 100 per cent green natural gas for their operations.

The basis of the announcement is a partnership with Canadian green energy marketer Bullfrog Power. According to a news release, GIB will be “avoiding 100 percent of the emissions associated with the energy used by its brewery facilities.”  Under the agreement, Bullfrog Power’s generators will put 100 per cent clean, pollution-free electricity into the Canadian power grid to match the amount of conventional power that Granville Island Brewing’s facilities use.

Bullfrogpowering, as Bullfrog likes to call it, means paying a fee over and above one’s regular power utility in sponsorship of an energy displacement program that pushes “green power” onto a grid to offset the usage of regular power by the customer. Power supplied by Bullfrog’s partners might include low-impact hydroelectric or wind, amongst other sources. Bullfrog uses part of that customer revenue — both residential and commercial — to in turn support the development of green energy suppliers in Canada, including solar and biofuel.

GIB General Manager Dave Nicholls says that the brewery has been working on ways to raise their green game for some time. “We were doing a number of small and meaningful sustainability initiatives, such as sending spent grain to farmers, and sourcing local ingredients for our Honey Lager and Raspberry Ale.” GIB has also participated in a bottle pool in which glass is recycled up to 10 times before being broken down. Recently they’ve invested in small things like changing the taproom’s lighting to LED, and larger things like upgrading equipment to keep it working efficiently.

When it comes to environmental responsibility, “We have to walk the talk”, says Nicholls. So GIB has been looking at moving to cans instead of bottles for some of their packaged line, due to the lower environmental impact cans may represent. Other changes in attitude might include skipping the use of cups at beer events. He talks about the value of raising internal awareness amongst their staff, as well as public awareness of small things folks can do, such as filling reusable growlers.

“Here in Vancouver we’re living the West Coast lifestyle and appreciating what we have around us”, says Nicholls. “We wanted to do more to help, so we started looking for a bigger initiative. Committing to renewable energy with Bullfrog Power is the latest step in Granville Island Brewing’s sustainability journey.”

Sustainability is a subjective term; trying to put one’s finger on the meaning of the term typically leads only to debate. In a manufacturing context, it’s probably not possible for stakeholders to agree on a method to reach full sustainability. Certainly brewing is known as an endeavour that gobbles extensive resources, especially water. The activity can involve the use of caustic cleaning chemicals. The only truly green beer you can buy, one might say, is the type you should avoid on March 17th.

Here in BC, Turning Point Brewery has marketed their Stanley Park brand for years as “Sustainably Brewed”, noting that they have “one of the only brewery-owned wind turbines in North America”. Their claims have drawn criticism from some of the craft beer blogging community. West Coast folks take greenspeak seriously, and if the talk is just for show, they’ll call businesses on it.

Brian MacIsaac of Crannóg Ales is well known in BC craft circles for his ability to offer a solid rule on the topic, which can be loosely quoted as “if you plan for continued growth, you’re not planning for sustainability”. As noted by Kelsey Klassen in The Growler, Brian says, “Because we have a finite world, we have to realize that to start a ‘sustainable business’ you have to start with a growth-cap strategy. You have to have an end in sight – a sweet spot where things are getting looked after, employees are getting looked after, and you have enough of an income to continue doing what you’re doing, but you don’t constantly grow.”

Certainly a publicly traded company like GIB’s parent (via Creemore Springs) Molson Coors, would seem to require continued growth in order to satisfy its shareholders. Within the corporate structure, however, there may indeed be people whose purpose is to move the needle forward in terms of lessening environmental impact. Case in point: Jamie MacKinnon sports the job title Global Sustainability Senior Manager at Molson. Nicholls singles out Jamie for his role in the Bullfrog initiative; having a person who sits on the senior brewery’s global team for sustainability was instrumental in guiding this solution.

Of course, the Bullfrog decision could be interpreted by cynics as a didactic command from above. In fairness, it should be mentioned that GIB is the leader in making this move, at least within its corporate bretheren; other Molson divisions are not yet clients. GIB is Bullfrog’s first brewery customer in BC. Granville Island’s commitment falls within Bullfrog’s “Steward (1,000 – 4,999 MWh or 7,000 – 34,999 GJ or equivalent combination)”  level.

Bullfrog counts amongst its clients other Canadian brewers such as Steam Whistle, Sleeping Giant, and Beau’s All Natural Brewing, all of Ontario, as well as North Brewing Company of Halifax. Locally-represented Craft Beer Market, based in Alberta, has also gotten aboard for their beer operations. “There is a premium cost to Bullfrog Power, but we felt it was worth it” remark Steam Whistle’s co-founders Cam Heaps and Greg Taylor.

Clearly, one upside of having Vancouver’s first microbrewery make this move is the impression it might leave on small and medium players in the BC brewing space, given the implied leadership role at play here. More importantly in the big picture, a name like Granville Island may help residential users become aware of alternative power options and greening programs. It seems that both GIB and Molson understand the value and legacy of Granville Island’s brand and are seeking ways to steward it responsibly.

GIB’s new ‘Powered by Pints’ initiative goes further than just their Bullfrog account. They’re challenging Canadians to host a ‘Mingle in the Dark’ party in which they power off all lights and electronic devices, and enjoy craft beers in an eco-sustainable manner by candlelight. Tonight they raise a toast to their new program’s launch at the first Mingle party (event details below). It seems only natural to wish them more power in their drive to consume less.