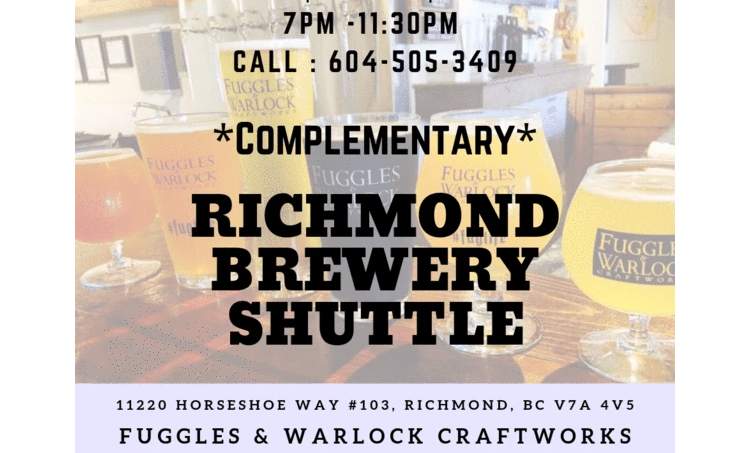 RICHMOND, BC – Award Winning Brewery, Fuggles and Warlock Craftwork has collaborated with Canadian Craft Tours to provide free shuttles for customers in Richmond, BC.

The free shuttle service will commence on October 10, 2019 and operate Fridays and Saturdays between the hours of 7:00 pm to 11:30 pm. To access on-demand pickup and drop off anywhere in Richmond, BC, customers should call the shuttle phone number on (604-505-3409). Each Richmond brewery shuttle can accommodate up to 14 persons.

Canadian Craft Tours offers guided brewery tours, to locals and tourists alike, in Greater Vancouver, Victoria Nanaimo, Kelowna, Calgary and Edmonton. Managing Director, (Brandon) endorses the partnership with Fuggles: “We are delighted to have been chosen to partner with Fuggles and Warlock and look forward to serving their customers.”

Fuggles and Warlock Craftworks is known for their adventurous brews and focus on Geek Culture with references to video gaming and pop culture. Always on the cutting edge of beer technology and in accordance with their motto of keeping beer weird, the brewery recently released a limited-edition Fresh Hop IPA – 2019 Edition. Freshly picked Centennial, Cascade, and Chinook hops from the neighbors at Crescent Island Hops in Delta, B.C. was immediately brought into the brewers and thrown into the brew within hours of picking. The magic of the fresh hops delivers juiciness and dankness that we will never get from dried hops. Enjoy a light malt body and a citric blast from the wet hops!

Commenting on the decision to partner with Canadian Craft Tours for a Richmond brewery shuttle, owner of Fuggles and Warlock, Glen said:  “Canadian Craft Tours offers beer tours focused on local breweries so we thought what better company to partner with to provide a free customer shuttle service to bring the beer lovers in Richmond to our brewery so they can experience our craft beer and wonderful atmosphere.”

For further information about the customer shuttle, visit https://www.canadiancrafttours.ca/products/richmond-brewery-shuttle. Learn more about Fuggles and Warlock Craftwork at: www.fugglesandwarlock.com.