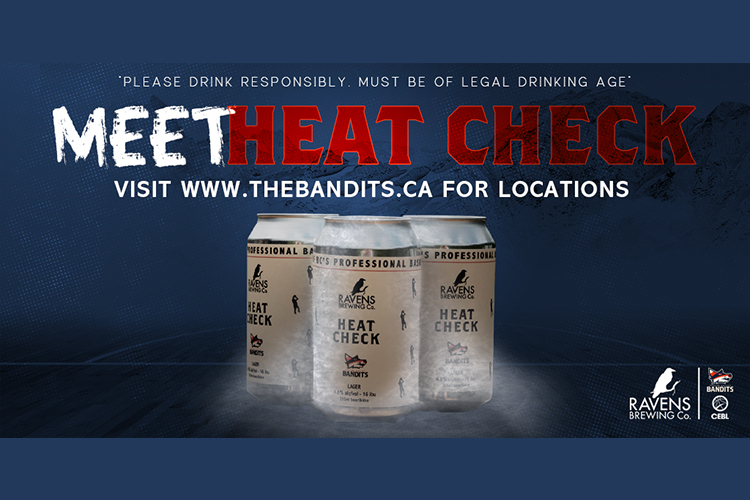 Craft lager arrives just in time for summer and is immediately ready for purchase at select locations.

ABBOTSFORD, B.C., June 18, 2020 – The Fraser Valley Bandits and Ravens Brewing announced Thursday that they have launched a beer collaboration called Heat Check. Heat Check is a craft lager that is an exciting co-branded rendition of Ravens Brewing’s popular Sumas Mountain Lager. Heat Check represents an alignment between one of the Fraser Valley’s renowned breweries and British Columbia’s professional basketball team.

Based in Abbotsford, Ravens Brewing started nearly six years ago and has quickly grown to be one of the Fraser Valley’s most popular breweries thanks to successful partnerships and a dedication toward brewing high quality beers. The Bandits announced Ravens Brewing as the team’s Official Beer Partner on Dec. 12, 2019.

Inspired by both full flavoured German lagers and their easy drinking American cousins, Heat Check craft lager is a beautiful showcase of 100 per cent Canadian malt and sterling hops. A delicate balance of malt and hop character paired with a light bitterness provides a delicious, crisp and refreshing combination that features 100 per cent British Columbia grown barley, locally sourced hops and 100 per cent Canadian ingredients.

“We are excited to release a co-branded version of our very popular lager this summer for people to enjoy. With both great taste and a sleek design, Heat Check is a delicious beer that has already drawn demand from liquor stores across the Fraser Valley and Lower Mainland,” said Paul Sweeting, Owner of Ravens Brewing.

As of today, Heat Check is available for purchase at locations across the Fraser Valley and Lower Mainland at a price of $13 and is sold as a six-pack of 355 milliliter cans. Heat Check is an exciting entry into the market as an economical beer option that features local ingredients and an eye-catching design that will jump off the shelf.

The artwork on the Heat Check can showcases a minimalist design that pays homage to the Bandits’ team colours, as well as basketball vernacular. A “heat check” refers to when a particular player has made a series of consecutive shots and is on a roll, which leads to this specific player experiencing a jolt of confidence in one’s shot-making abilities.

“The Bandits would like to thank Paul Sweeting and the entire team at Ravens Brewing for their commitment to launching Heat Check. We have had great feedback from stores on the beer’s taste and branding and we look forward to engaging with current and new fans as they enjoy Heat Check responsibly this summer,” said Bandits Vice President Dylan Kular.

Locations where Heat Check is available for purchase:

Ravens Brewing will be the official sponsor of the Baseline Bar area on Bandits game days, which functions as a premium space that offers four-person tables atop an elevated bar with a close-up view of the action. Tables offer at your table service and the option to pre-order dinner and snacks courtesy of Abbotsford Centre.

About the Fraser Valley Bandits

The Fraser Valley Bandits are British Columbia’s professional basketball team. As the westernmost club in the Canadian Elite Basketball League (CEBL), the club is proud to call Abbotsford Centre home. The Bandits offer a riveting entertainment experience that combines a fast-paced game day atmosphere with a presentation of some of Canada’s top professional athletes within a world-class venue. Head to thebandits.ca for more information.

About the Canadian Elite Basketball League

The Canadian Elite Basketball League (CEBL) is a new basketball experience that features world-class professional basketball in a fan-friendly entertainment environment across seven cities in Canada. The 2019 inaugural season saw more than 100 Canadian and international players take to the court, culminating with the Saskatchewan Rattlers earning the first CEBL championship trophy. CEBL players come from NBA G League clubs, top NCAA programs, the Canadian national program, U SPORTS and other Division 1 FIBA leagues. As the First Division Professional League partner of Canada Basketball, all games are live streamed on the CBC Gem app, CEBL.TV and the Island Sports Network. Head to cebl.ca or follow us on Twitter, Instagram, and Facebook to learn more.