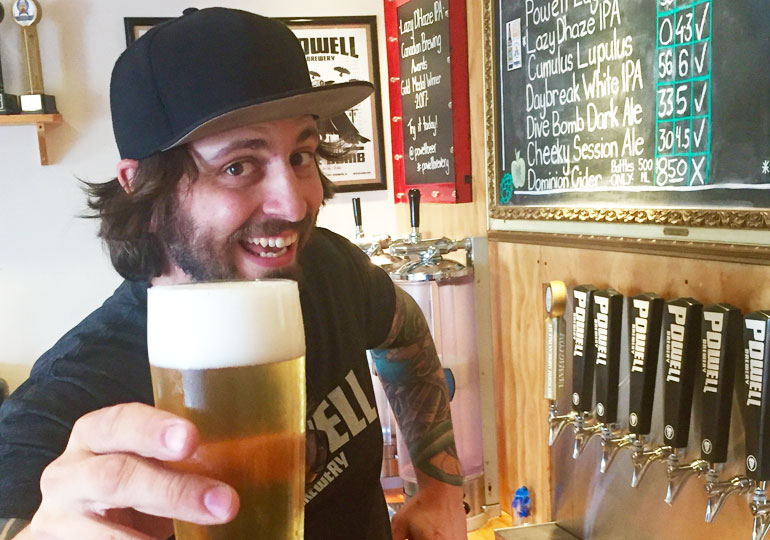 By Carlos Mendes for Scout Magazine

When I first met David Bowkett on a rainy Saturday afternoon in December of 2012, he and his wife, local photographer Nicole Stefanopoulos, had just opened the doors of their original location on 1830 Powell Street (now home to Doan’s Craft Brewing). Looking back, I don’t think that either of them could have ever imagined what the next year would hold for their fledgling nano brewery. Personally, after hearing so many good things about David’s beer from a mutual friend (and after sending poor Nicole a few too many emails asking about when they’d be opening), I was just really excited to have my first taste.

I wasn’t the only one. David will be the first to admit that he and Nicole were pretty shell-shocked by the endless lineups that day, which were fuelled in no small part by all the pent-up excitement that my neighbours and I had for the hood’s fourth brewery (after Storm, Coal Harbour and Parallel 49). Well, the two of them made it through that first weekend relatively unscathed, and over the next few months sales were solid and things generally progressed as they had envisioned, but let’s just say that their initial plan for David to keep his day job as an architectural engineer (brewing on the evenings and weekends), with Nicole working on her art when things quieted down never really materialized (at least not for long).

You see, in May of 2013, a mere five months after Powell opened its doors, David’s phenomenal ‘Old Jalopy’ Pale Ale was recognized as Canada’s best beer at the 2013 Canadian Beer Awards. Cue the insanity. Pretty soon, people from far and wide were lining up to fill as many growlers as they could, and David was brewing every free minute he had. As you’d expect, that little nano system just couldn’t produce enough beer to meet demand, so before long David was forced to quit his day job, became a full time brewer, and he and Nicole moved their operation a few blocks west to a much larger facility.