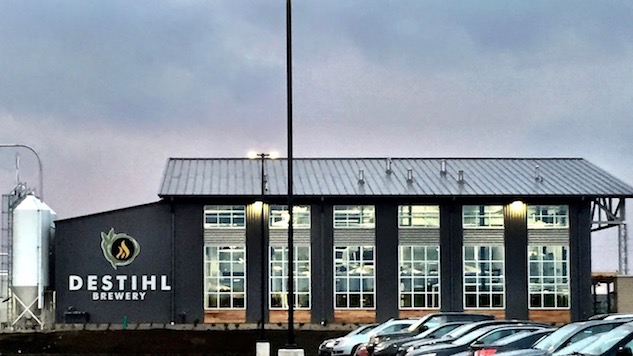 By Lawson Rudasill for Paste

If you haven’t heard of Destihl Brewery, you will soon. With a new multimillion-dollar brew hall and production facility recently opened in Bloomington-Normal Illinois, they are poised to break out well beyond the 20 states you can find them in now, having just added New York to the list. Their story is a unique one. Destihl jumpstarted an entire state’s brewing industry. They helped changed the laws and returned power and opportunity back to the brewers and away from the distributors. They’ve won awards for their face melting, never boring brews at festivals around the country and helped put Illinois on the must-stop brew-tour map. And now they’re getting bigger, remaining independent, and still boycotting bland. That’s great for everyone, unless you’re AB InBev. If you’re looking for a good guy in the Beer Wars who just made it big and has no plans to sell out… his name is Matt Potts, and this is the story of Destihl.

Illinois was desert of independent microbreweries for a very long time. It’s fair to say that the Midwest (Illinois in particular) found itself about 10 years behind the curve of the booming craft beer industry on the East and West Coasts. Draconian distribution laws and out dated local liquor ordinances were largely to blame. Having Budweiser due west in St. Louis and Miller due North in Milwaukee didn’t help either. But, there was a little room to work for small businesses if you had a “brewpub” where at least 50% of your income came from food. In November of 2007 Destihl Restaurant and Brew Works launched in Normal, IL. It was an instant success. In 2011 a sister brewpub opened in Champaign Il. As business continued to boom, the idea of distributing to other local bars and restaurants became the focus. Destihl’s brewmaster Matt Potts, who is also a lawyer, spent years working with the Illinois Craft Brewers Guild to amend the laws that kept breweries from distributing their own beer, a legal battle that changed the craft beer landscape in Illinois.