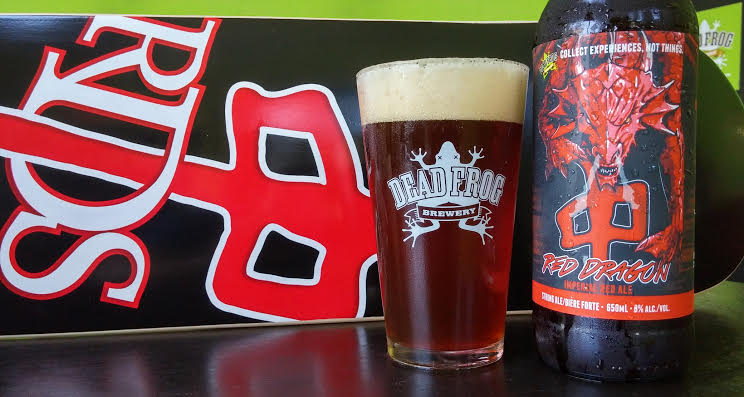 The Red Dragon Imperial Red Ale, a collaboration between Dead Frog and Red Dragon Apparel, is back for 2016 with a fresh look designed by the Red Dragon team.  “This is a bad ass beer – if you like lots of hops and big flavour, this is the brew for you,” says Red Dragon CCO, Dave Boyce.  “We’re stoked to be teaming up with Dead Frog again for a beer that pulls no punches, just like RDS.”

The Red Dragon Imperial Red Ale was a big hit last year, and the recipe stays the same for this year’s brew, with the exception of added Mosaic and Centennial hop varieties for a more robust aroma.  “This beer is all about delivering big citrus hop flavour and aroma, and balancing it with a deep and complex malt base,” says Dead Frog’s Head Brewer, Steve Black.

The Red Dragon Imperial Red Ale is a monstrous dark red ale with massive helpings of hops and malts.  A robust and rich malt base is perfectly balanced with tropical citrus hop flavour and aroma, provided by abundant Citra and Mosaic dry hopping.  The brew comes in at 8% alc./vol.

The Red Dragon Imperial Red Ale is a single batch brew.  It’s available now in liquor stores in BC, Alberta, The Yukon, and Washington in 650mL single bottles, for a limited time only.

Unpasteurized, preservative-free, and small batch brewed, Dead Frog beer is also available on draught in select pubs, restaurants, and for growler fills at the brewery. Follow us on Twitter @DeadFrogBrewery for announcements on availability.