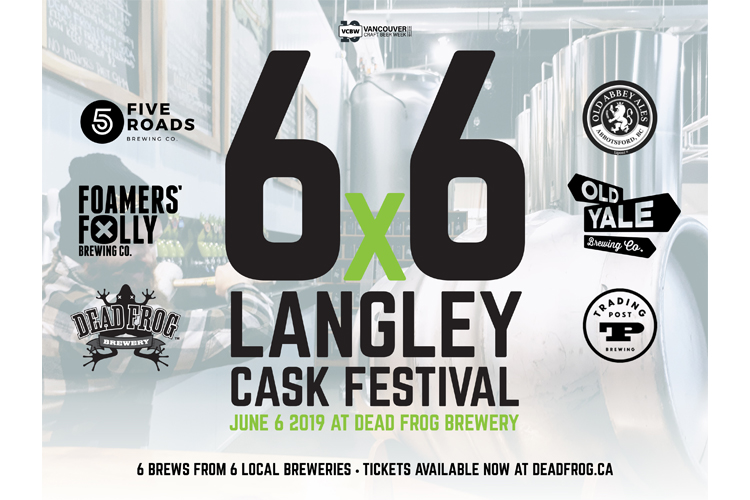 Vancouver Craft Beer Week will be taking place from May 31st to June 9th and Dead Frog Brewery is bringing it to Langley with the 6×6 Langley Cask Festival! Celebrate the amazing, award-winning beer the Fraser Valley has to offer with a day of cask beer created award-winning Fraser Valley breweries.

“VCBW is an important part of our industry, and we wanted to put something on at our brewery to celebrate it,” says Dead Frog Brewmaster Cole Smith. “We’re proud to be a part of the Fraser Valley brewing community, and we want to share the great beer we’re all making here with everyone.  It’s going to be a blast and we hope you come out to enjoy the casks we’re tapping for the festival”

The 6×6 Langley VCBW Cask Festival will take place on June 6th. Tickets are available online, which include 6, 6oz glasses of cask beer, and a special 6oz tasting glass to take home. Join us in celebrating the 10th anniversary of Vancouver Craft Beer Week and all the Fraser Valley has to offer!

The 6×6 Langley Cask Festival Breweries include:

Five Roads. Langley’s newest brewery, whose doors to their beautiful taproom officially opened on April 24th. Make sure to stop by and say hello.

Old Abbey: Founded in 2013, this Abbotsford brewery is known for their use of quality, local ingredients, and creative tasting room brews.

Old Yale: Located in beautiful Chilliwack, this brewery is known for their appreciation of good beer and the great outdoors! They recently just expanded their tasting room space to fit more beer-loving people.

Trading Post: Trading Post is well known for their tasty beer and delicious eats. With three locations including one tasting room in Langley BC and two different eatery locations.

…And of course Dead Frog Brewery.

Dead Frog is an independent, award-winning craft brewery in Langley, British Columbia. In January 2006, Derrick and Donna Smith launched Dead Frog with the goal of producing premium quality, creative and innovative brews. In June 2018 Dead Frog made the big move from their cramped brewery in Aldergrove to a beautiful new tasting room in Langley BC.