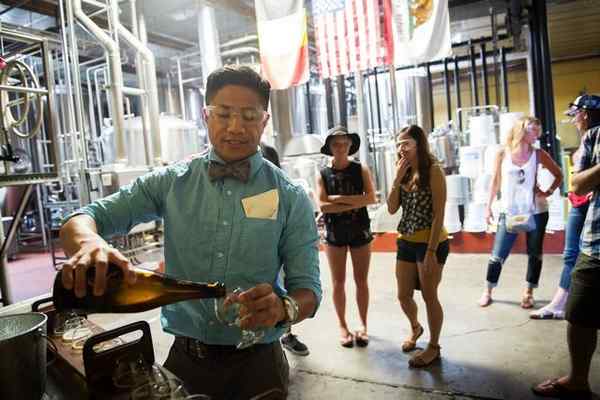 Above Image: Josh Reyes, a tour guide at The Bruery in Placentia, pours glasses of beers for customers attending a tour of the brewery. JOSH MORGAN — STAFF PHOTOGRAPHER

Admit it, pessimists: the craft beer movement has defied your gloomy predictions.

A year or two ago, even supporters of the dozens of neighborhood breweries that have popped up all over Southern California were predicting the movement had reached its apex. Surely we would see a die-off. There can’t be that many fans of double IPAs, Imperial stouts and sour beers.

But the growth continues. And many craft breweries that fail quickly re-open under new ownership and brew masters.

Nationally, the news is just as positive. A March, 2017 report from the Brewers Association estimates that craft beer now claims 12.3 percent of the overall market share by volume in the U.S. In 2016 there were more than 5,300 breweries in the country, and they produced 24.6 million barrels of brew, a 6 percent increase over 2015.