Local Craft Breweries launch commemorative beer in support of our men and women in uniform.  Proceeds from Canada-wide sales to be donated to Honour House in the name of prominent Afghanistan Veteran, Cpt. Trevor Greene.

Vancouver, BC – February 14, 2019 – Smugglers’ Trail Caskworks and their brewing partners Craft Collective Beerworks announced today that they will be joining forces to produce a commemorative beer called Orion 1-1.  Partial proceeds from the sale of this beer, and other future beers in this series, will be donated to Honour House, a “home away from home” for military, veterans and emergency services personnel.   Orion 1-1 will be bottled February 22, 2019 at Craft Collective; the preview launch party will take place March 2nd at the Bessborough Armoury and the beer will be released to the public March 4th via retailers throughout the province.

The inspiration for Honour House came from the healing journey of wounded Afghanistan Veteran Captain Trevor Greene.  Captain Greene is a former rugby teammate of Smugglers’ Trail Directors Jamie Overgaard and Stephen Gregorig.  Craft Collective CEO Andrew Harris is also a former rugby player and became passionate about the beer project: “We have been looking for a way to help people directly; people who are around us every day…people who selflessly help us”.

Honour House President Allan De Genova has also thrown his full support behind the project: “When I met Captain Trevor Greene and heard his heroic story of sacrifice and survival, I knew right away that much more needed to be done to help our injured men and women in uniform. Trevor’s indefatigable spirit was the constant driving force and inspiration for all of us who worked so hard on the development of Honour House. Now, with the recent addition of Honour Ranch, we are determined to support many more of some of our bravest Canadians whose lives have been affected, whilst deployed overseas or right here in our communities.”

The Alpha Company ‘Red Devils’ of the Princess Patricia’s Canadian Light Infantry were the tip of the spear of Task Force Orion, the first Canadian Troops to fight in Kandahar, Afghanistan in 2006.  Captain Greene (known as ‘Gordo’ in the rugby club) was the victim of a merciless axe attack to the head in March of the same year.  His improbable healing journey has been widely publicized with documentaries, television coverage and print articles including the CTV documentaries Peace Warrior and The Power of Love along with Capt. Greene’s own 2012 book, March Forth.

“You should see me drink beer”.  Were some of the first words spoken by Captain Trevor Greene after emerging from a coma, when asked if he needed water.  Throughout his healing journey, Captain Greene and his family made Honour House their home while receiving medical treatment in the Vancouver area.   Why IPA? Because Gordo says so. That’s why.

About Honour House Society – New Westminster, BC – A refuge, a “home away from home” for members of our Canadian Armed Forces, Veterans, Emergency Services Personnel and their families to stay, completely free of charge, while they are receiving medical care and treatment in the Metro Vancouver area.  www.honourhouse.ca

About Smugglers’ Trail Caskworks Ltd – Langley, BC – Have been producing three of their recipes at Craft Collective since the end of 2017. The Smugglers recently were awarded “2018 Canada Winners – Kolsch Style Beer” at the World Beer Awards and are in the process of opening their own tasting lounge and brewery in late 2019. www.smugglerstrailcask.com

About Craft Collective Beerworks – Vancouver, BC – Canada’s only collaborative craft brewery, merging contract brewing, sales representation and its own proprietary brands into a one-stop, innovative solution for breweries and retailers in an increasingly competitive and difficult-to-navigate market.  www.craftcollective.beer

While it was Overgaard’s idea to support the cause inspired by Greene through the sale of a craft beer, it was Captain Greene himself who chose the style of the first Honour House Beer: “IPA, it has to be IPA. It has to be big, bold and citrusy”. 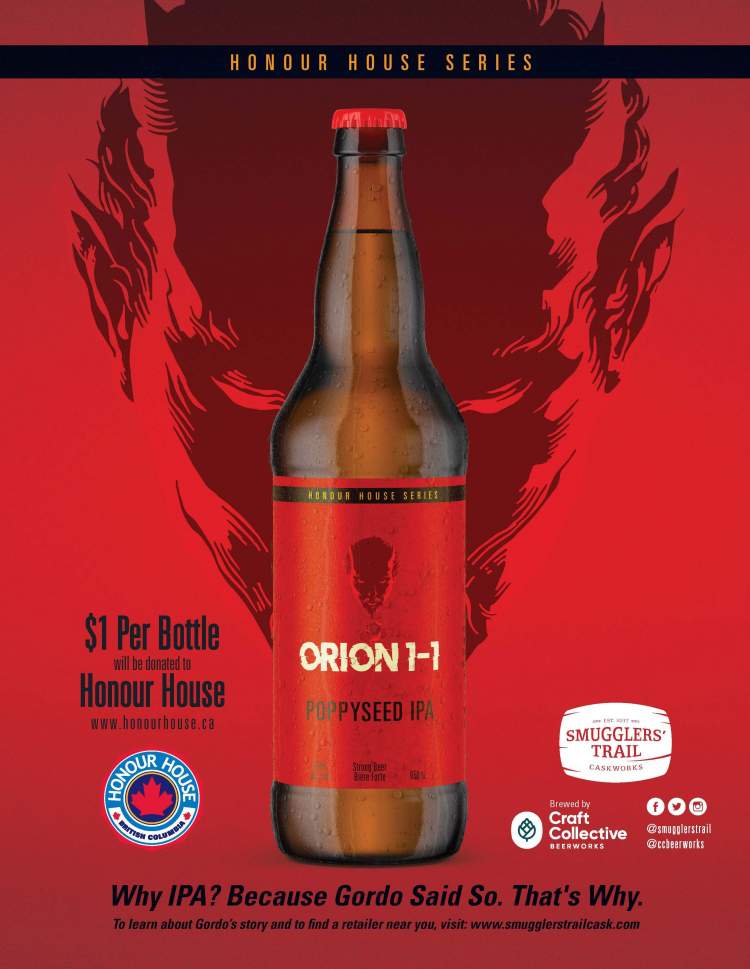