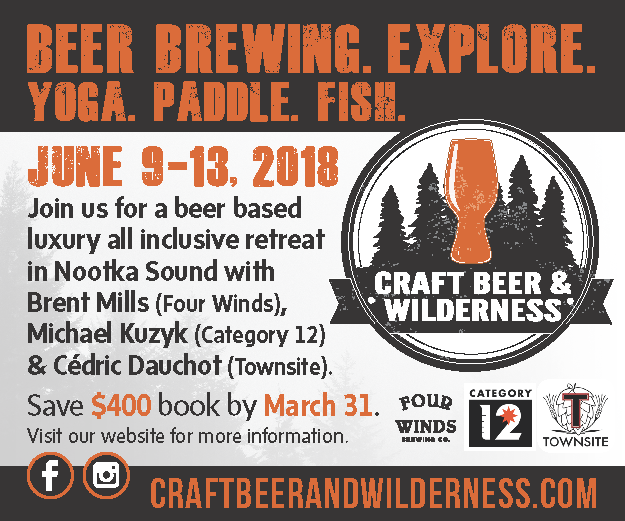 The inaugural Craft Beer & Wilderness Retreat is set to take place June 9 to 13, 2018 on the remote coast of Vancouver Island.

The retreat is the brainchild of Island couple Brad Harris, who brews beer for charity, and his partner Dennyse, an event planner who specializes in retreats for women. In January, the Vancouver Island couple decided to combine their passions and create a distinctively Canadian experience.

“The retreat is a way for us to combine our passions, bring people together, connect with nature and celebrate craft beer,” says Dennyse. “And it all takes place in a luxurious and utterly spectacular West Coast setting. Whether you’re an established craft brewer or just thinking about getting your home brew on, you’re going to have a fabulous time!”

The all-inclusive five-day event is being held at the well-appointed and renowned Nootka Sound Resort, located in Galiano Bay, near Tahsis on Vancouver Island. The floating lodge is nestled in a protected inlet that it shares with sea lions, otters and occasional whale pods, and is surrounded by lush rainforest that’s home to eagles, wolves, cougars and bears.

Other items on the itinerary include yoga on the dock, kayaking and SUP boarding, informational lectures on the fascinating surroundings and even a half-day boat tour to historic Yuquot (Friendly Cove) on Nootka Island. Participants will also have the option of chartering a boat and going fishing with Nootka Marine Adventures.

The buzz in the craft brewing community is rampant, says Brad, who adds that they already have brewers lining up for future retreats. This year’s featured brewers include Brent Mills, head brewer and co-founder of Four Winds Brewery in Delta, B.C.; Michael and Karen Kuzyk, co-founders of Category 12 Brewing on the Saanich Peninsula near Victoria; and Cédric Dauchot, brewer and owner of Powell River’s Townsite Brewing.

“They’re all so talented, and we’re thrilled to have these artists share their knowledge with our guests,” says Brad. “The great thing about making craft beer is that no matter what your experience level, there’s always something to learn and share. This is a rare opportunity to talk shop with some of the best in the business.”

To ensure that the needs and interests of both newbies and experts are accommodated, all scheduled brew sessions will have three parallel streams – extract brewing in a bucket, inexpensive all-grain brewing and full commercial pilot-system brewing.

“While the beer aspect is going to be phenomenal – not to mention the resort’s gourmet food – we’re just as excited to showcase and introduce people to this absolutely stunning area,” says Dennyse. “It’s a celebration of nature and craft beer – it’s uniquely Canadian and yet there’s currently nothing else like it in Canada.”

The cost of the five-day all-inclusive retreat is $1,999 (plus taxes) per person, although a $400 early bird discount drops the price to just $1,599 before April 15. Private bus transportation to the resort from either Campbell River Airport or Comox Airport is included. For more information or to reserve a spot, visit www.craftbeerandwilderness.com.