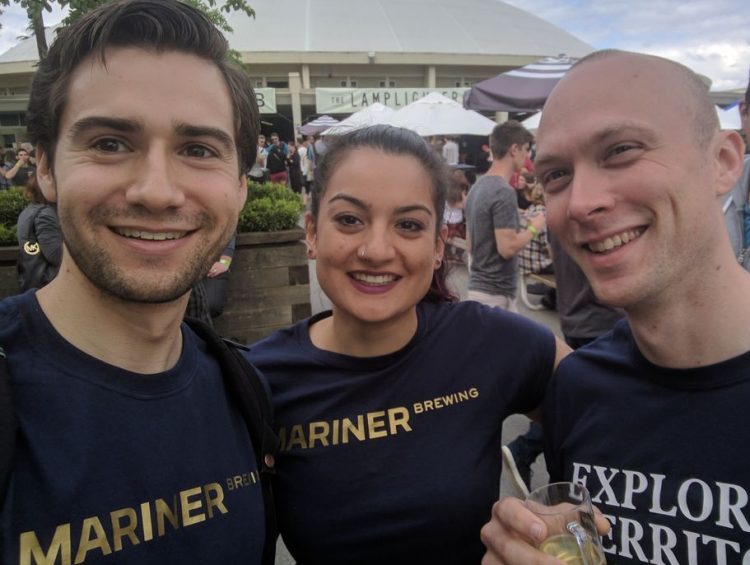 Craft beer fans in Coquitlam have no doubt cast their eyes longingly to Tri-Cities cousin Port Moody in recent years, wondering when their city, a suburb in the Greater Vancouver area, would develop its own beer scene. Its seems that we’re a major step closer to seeing that happen.

Long-time Coquitlam beer fans will recall that the Coquitlam Centre mall area was once home to a brewpub called Coquitlam Brewing Company, a startup that employed well-known BC brewery pioneer Don Moore (now with Canada Malting Co.; seen in front of the Coquitlam brewhouse in this 1999 photo). In 2000, the name apparently changed to Legends Brewing Co., then by 2001 the location shut down.

It’s been 16 long years, during which time Metro Vancouver has witnessed a boom in craft brewing. Breweries have popped up like mushrooms in East Van, have spread throughout the Fraser Valley, and clustered on Brewers Row in aforementioned Port Moody. Now there’s finally light at the end of the tunnel for the thirsty citizens of Coquitlam. Meet Mariner Brewing, set to become the first modern craft brewery and tasting room in this corner of the Lower Mainland.

Mariner’s lounge license was approved just over a week ago by the notoriously careful Coquitlam City Council. In 2016, What’s Brewing reporter Mallory O’Neil spoke to City Councillor Craig Hodge and documented the slow progress over at city hall in this story. At the time, we were expecting a newcomer named Prototype Brewing (renamed from ‘Beerocracy’) to become the next brewery in Coquitlam. Looks like they’ve gone dark.

But back to the happy news. According to this BrewingWork posting, the Mariner facility will feature a 20 bbl brewhouse, a tasting room, and room to expand packaging equipment and cellar. Construction updates can be seen at Mike’s Craft Beer. A Q&A interview with founder Byron Vallis can be read at Vancouver Brewery Tours.

Here’s the latest word on overall progress from a recent news release.

Mariner Brewing will push the bounds of craft beer

Mariner Brewing, Coquitlam’s first craft brewery, is poised to open this summer. Located at H-1100 Lansdowne Drive in the Coquitlam Centre neighbourhood, Mariner Brewing is eager to satisfy a thirsty suburb and make their mark in the regional craft beer scene.

In the short span of a year, founder Byron Vallis has progressed Mariner Brewing from an idea to a reality. Vallis has teamed up with veteran head brewer Kevin Wilson to develop Mariner’s opening lineup, featuring a northeast IPA, an amber ale, a cream ale and a sour wiesse. Mariner will also house a West Coast inspired canteen, serving an array of gourmet hotdogs and sharable plates.

“We are excited with how well the brewery has come together in the last month,” says Lauren Ang, Mariner’s Taproom manager and Chief Consumption Officer. “Our goal is to create a comfortable space where people are able to relax and have a great time with friends. I think that’s what craft beer culture is all about… well that, and the beer.”

Mariner’s taproom will feature seating for 45 people, growler fills, custom merchandise, grab-n-go coolers, all tied together with design by Glasfurd & Walker Design and Ply Architecture. On May 29th 2017, Mariner Brewing’s Lounge license was approved by Coquitlam City Council, echoing the excitement felt throughout the community and leaving only minor construction in the way of Mariner’s opening.

Mariner Brewing can be found on Facebook, Instagram and Twitter @marinerbeer or at www.marinerbrewing.ca.
Inquiries can be sent to Chief Consumption Officer Lauren Ang at [email protected].

Other coverage: see section on Coquitlam in this previous story