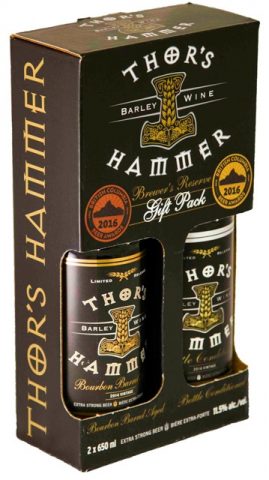 Surrey, BC, Canada – Following the auspicious releases of Central City’s Sour Brown I and Sour Kriek II, the brewery is introducing the third edition in its Sour series: Central City Sour Framboise III.

The Central City Sour Framboise III is a traditional Belgian-style sour infused with local raspberries and aged for more than two years in a combination of Cabernet Sauvignon barrels and French oak Foeders. Long maturation on the berries, combined with the sour culture mix of Brettanomyces, Lactobacillus and Pediococcus produces a very complex beer with tart raspberry notes up front, and a dry finish with notes of grass and hay.

“Sour beers have been very popular in the last 5 years here locally,” says Gary Lohin, Brewmaster at Central City Brewers & Distillers. “I like to follow the traditional Belgian way of brewing sours using the slower, barrel-aging methods to draw out the complexities of the flavours and adding interesting ingredients like raspberries or sour cherries. What we get is a stronger, more full bodied profile that beer connoisseurs can savour, like you would get from a wine or port.”

Also just in time for Christmas, Central City is introducing a Thor’s Hammer Barley Wine Gift Pack, a combo-pack that includes a 2014 bottle-conditioned Thor’s Hammer, which won Gold at this year’s 2016 BC Beer Awards, and a 2014 Bourbon barrel-aged Thor’s Hammer, which won Bronze. The award-winning barley wine is mahogany in colour and crafted from fine barley malt exuding deep, rich notes of dried fruit, plum and candy with a walnut ester.

About Central City Brewers + Distillers:
Central City is a craft brewery and distillery in the business of developing, producing and selling international award-winning, premium craft beer and high quality distilled spirits brewed without compromise. Based in Surrey, British Columbia, CCBD was voted Canada’s Brewery of the Year in 2010 and 2012. Their Red Racer brand has become a cult icon among craft beer enthusiasts throughout North America. Founded in 2003 as a brewpub and liquor store in downtown Surrey, CCBD celebrated its 10th anniversary in 2013 with the grand opening of a brand new, 68,000 sq. ft. brewery and distillery on Bridgeview Drive. It opened a second restaurant in downtown Vancouver, Central City on Beatty in 2015.  www.centralcitybrewing.com