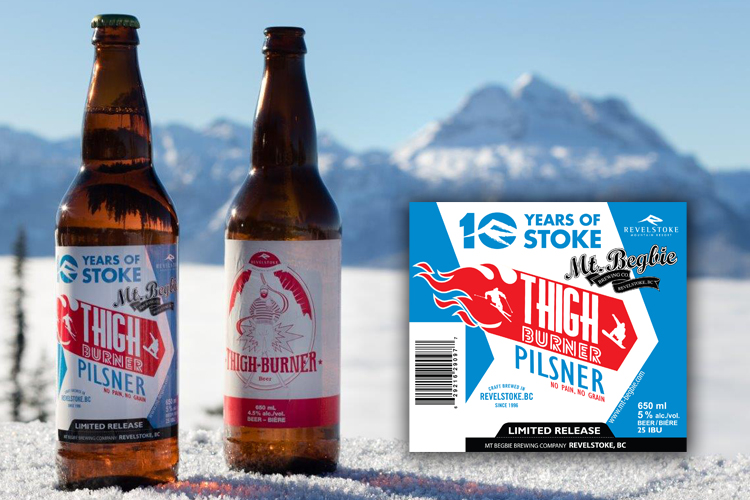 The history of this particular brew runs deep – almost as deep as the burn you feel after skiing the 5,620 feet of vertical the resort has to offer. The Thigh Burner was originally bottled in 2007 to commemorate the opening of the resort, and now, 10 years later — it’s back!

According to Darryn Shewchuk, Director of Marketing for the brewery, the limited edition beer is a Revelstoke spin on a Czech classic. The recipe combines both local and traditional ingredients, the most important of which is the ‘hard’ (mineral rich) mountain water from nearby glaciers. “The taste is clean, crisp and refreshing with much more flavour than a regular lager,” Shewchuk explains.

Thigh Burner Pilsner is available on draft exclusively at Revelstoke Mountain Resort, and on shelves in local liquor stores. But get your pint and celebrate 10 Years of Stoke while you can, because, as Shewchuk warns, “it’s a limited edition, so once it’s gone it’s gone.”

Visit revelstokemountainresort.com/events to see a full calendar of events to celebrate the resort’s tenth year in operation, and cheers to another great season!

In 2016, Revelstoke Mountain Resort (RMR) was voted Best Canadian Ski Resort by the World Ski Awards in Austria. Since 2007, RMR has offered the most vertical in North America at 1,713 metres (5,620 ft.) of lift-accessed terrain, 3,121 acres of fall line skiing, two high alpine bowls, and 65 named runs, including legendary glades and phenomenal groomers. Across the group of companies that include RMR and Selkirk Tangiers Heli Skiing (STHS), skiers and snowboarders have access to a total of 515,000 acres of terrain. In the summer, RMR is home to The Pipe Mountain Coaster, North America’s very first Brandauer mountain coaster, and also offers a breathtaking sightseeing experience via the Revelation Gondola. For the latest news, visit www.revelstokemountainresort.com

Mt. Begbie Brewing Company Revelstoke, B.C. has been brewing award winning beer since 1996 and won “Brewery Of The Year” at the Canadian Brewing Awards in 2017. For more information visit http://www.mt-begbie.com