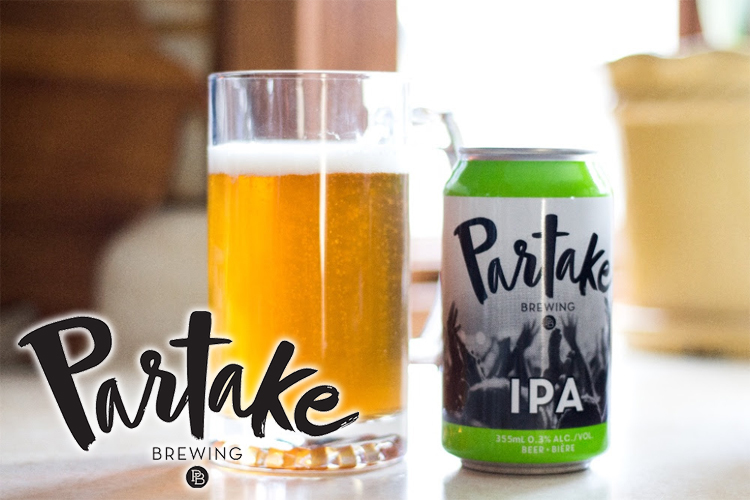 FOR IMMEDIATE RELEASE Vancouver, BC, March 12, 2018 — What does a Saudi Sheik have in common with an Olympic athlete and an expectant mother? They’re all helping fuel a global appetite for non-alcoholic beer, one sip at a time. It’s a category that has seen massive growth in the past several years with global brewery bigwigs such as Corona, Heineken and Budweiser aggressively entering the near-beer game. Canadian start-up success, Partake Brewing is set to make a mark of its own in the competitive category with an official Dragons’ Den debut on CBC this month.

Shares Fleming, “I was in my late 20’s and starting to get into the blossoming craft beer scene that was starting to take root in Toronto, but unfortunately for me, my journey was cut short due to a diagnosis of Crohn’s disease.” That diagnosis combined with becoming a father for the first time helped him prioritize his health and ultimately led to his decision to give up alcohol for good.

However, like so many others opting for the dry life, he still pined for the occasional pint. “I missed my beer, I missed the taste of it, discovering new craft beer flavours… I found I really missed the social connection too.”

To satisfy his craving, he set out to find a non-alcoholic beer that still tasted like beer only to discover that there was very little available to choose from and what was – tasted awful.  With the help of a successful Kickstarter campaign (April 2017), Fleming aims to change the non-alcoholic beer category for the better with his Canadian small batch-brewed non-alcoholic beer.  He is on course to do just that with his first beer, an award-winning non-alcoholic Partake Brewing IPA (a Lager, Red Ale, Pale Ale, and Stout are coming soon).

Headquartered in Calgary, Partake Brewing hopes to woo the Dragons’ for additional support when Ted Fleming pitches his creations on CBC’s Dragons’ Den this Thursday at 8pm on March 15th (#cbcdragonsden).

Partake’s brews are available across Canada and in select stores in the US. Learn more about where to purchase Partake Brewing Non-Alcoholic beer here.